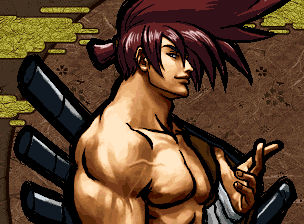 Too many swords, too many women.

Yoshitora is an all-rounder, with good mobility, solid range, easily hitconfirmable combos, and strong mixups. His damage is average at best but he has some of the best zoning tools and movement in the game. It's just that he has so many of them it takes awhile to get used to how the character works.

This is your basic BnB starter, and what you should be aiming to land more often than not. Note that you need to use the last hit of each attack for it to combo, and 5B is hella fickle about distance.

Ender that makes the opponent land near you, skip the 2BC for more oki potential.

Knocks the opponent away. Does roughly the same damage as 236A.

A situational starter, but leads to massive damage.

The only way Yoshitora has to combo into his WFT.

One of the very few ways of comboing into the instant kill.

This is his other most damaging combo, and it starts off with a low. Since 2AB is two hits to knockdown, you can confirm off the first and input something else during the cancel window if it's blocked.

As if 236B wasn't good enough, if it connects against a grounded opponent you can follow up with a large pursuit for still more damage.

For a bit of extra damage.

Hits low but is not terribly useful as 6C has about 8 billion startup frames. Use 3C instead.

This is a great combo. Hits low, does decent damage, has a lot of active frames and is relatively safe on block.

Another way to combo Asago.

If you have rage.

Not recommended, since 5B and n.5B can push opponent to far away for combo.

This has to be done low to the ground, but it hurts a lot. Taller characters like Kyoshiro or Gaira can be hit on the ground, forcing them into an unexplodable Issen.
Be careful who you use it on, because it doesn't work well on characters with high juggle boxes, like Haohmaru.

When you catch airborne enemies you almost always want to wait for the opponent to fall so you can Issen them in the back, as Yoshitora has few good options.
But if you can't do that, this is a good combo. Rejump the j.B until you feel you're running low on time, then Botan him to the ground. The timing on the 8BC is a little tricky, practice it a bit.

Since Yoshitora can crossup easily, you can try it on opponent who is unfamiliar with this tactic.

Works only on tall characters! You can add some more 2C or completely without it for mixups.

As Yoshitora is a well-rounded character, he doesn't have any particular strategy he sticks with. Offensive and defensive styles are both applicable.

His high/low game is not terribly scary, so he relies more on footsies to catch his opponents. Thanks to the range and relative safety of his attacks he can stay about half screen distance from his opponent very safely. He does have to worry about his normal slashes being deflected, but all of his other tools are safe from it.

Aside from deflects, you have to be careful of characters with long range throws as well as Jubei's parries. Grapplers can punish blocked attacks and Jubei can actually catch your specials. Mix up your timing and don't give them time to buffer it in.

Your biggest worry is going to be getting disarmed. Don't let WFTs hit you, don't let yourself have an AB/66B deflected. This is really important for Yoshitora.

If you do get disarmed, aim for a (very) far knockdown or try to pick up the weapon when the opponent is mashing weak pokes, since the full animation will be canceled if you are hit for any reason. If worst comes to worst, just fight unarmed: 3C, 2C, 5A, dash throw, and j.C are actually not bad tools at all. You can even combo u.66A 8BC.

In general, his mixup game chooses from the following options:

Yoshitora doesn't have anything jab-speed to punish with, but he has a lot of reasonably fast options that lead to good damage.

Yoshitora also has a lot of antiair options available to him:

It's up to you whether to meditate or rage, since Yoshitora has uses for both. The damage increase from rage makes Yoshitora's punishing ability a lot scarier, and that combined with his versatility means a raged Yoshi can shut down a lot of characters. On the other hand, time slows provide Yoshi a much-needed safe punisher, and he has some hard-hitting issen combos. Plus, you can get full chip damage from Asagao, which is more than a throw's worth of damage when using the AB version.

Yuuchouka - 632146BC:
Unlocking the final sword is something you want to do but is really hard to do in an actual match. Here's some ways of consistently getting each of the necessary moves:

The easiest one to land, since you'll be using this for all kinds of stuff anyway. 236A as part of a combo, 236B for zoning, or 236AB as antiair. Sooner or later you'll hit one.

This move only needs to be whiffed, it doesn't actually have to connect. Still, it's slow on recovery, so either combo into 623A, reversal with any version, or just throw it out on a far knockdown.

Like Shirayuri, this only needs to be used. A safe long range blocked jump, a kara canceled overhead, or antiair interception are all good ways to do get this off.

The most difficult one to land. You have to use the B or AB version since the A version doesn't hit, and those versions are very slow and do not combo from anything. Because it is so slow, the autoblock can catch an opponent's attack but he may still recover in time to block you. It also makes it hard to use against air moves without a good read.
There is one reliable way to connect Tsubaki, and that is off of any successful connected Deflect(216D). Good luck with that.

Slow startup but a surprisingly good hitbox. It's too risky to land this out in the open, since on block it is easily punished. Fortunately, it can be comboed off of n.5AB, backhit n.5B/5B/66B, or any successful deflect. The backhit is the easiest, because you can get one off of any bad jump by dashing under them and doing 66B on their landing recovery.

Almost as hard to land as Tsubaki. This move has very little range, but its 3 frame startup makes it easy to frame trap with. Plus it can catch outstretched hitboxes, so you don't have the same problems that normal throws do with grabbing opponents that lean forward. Because it still has grab properties, you cannot land this from a deflect.
Suggested ways of getting it in are frame trapping from a blocked 236B, or canceling forwards roll(3D) into it. If they do a high air attack and it whiffs or you block them, you can catch them out of landing recovery, but the timing here can be finicky.

Unlocking the sword only allows usage for that round. If you go to the next round, win or loss, the process starts over and you have to go through the whole process of unlocking again.
The startup is somewhat slow at 28 frames, allowing the opponent to safely hop forwards into you on reaction. The recovery is also slow, and it is easily punished if the opponent is still within range. This makes the good situations to use it in from full screen away, a backdash or backroll landing cancel, after confirming their wakeup from a far knockdown, or after a connected deflect. A deflect will guarantee a hit every time.
Note that the first hit does not launch and the opponent can still rage explode out. However, the pushback makes it very difficult to punish Yoshitora. Later hits will force a knockup, which cannot be escaped.

If Enja forward jumps? Just do 3C. It doesn't hurt much but it beats literally everything he can do. On the ground you have a decisive advantage due to range and speed, forcing him to chase you all day, which means he's running into your attacks more often than not. Be careful about either eating a heavy or letting him start his neutral jump game.

If Rimururu does her air ice block and jumps off, you can do 623AB to go through the ice block's active frames. You'll have to eyeball the timing.
Antiairing Rimururu is a pain because of her j.C stuffing many attacks. 66AB will often trade, and you need very specific spacings for 236AB to work. Most other things will lose without perfect spacing.

Any blocked spout can be punished by mashing on 5AB immediately.
Since your AB has such a funky hitbox you can punish A or B spout on block even if he's behind a bubble.

Zankuro has no answer to j.AB. Not even his mighty 2AB stands a chance. Abuse liberally.

Avoiding being thrown is your primary objective here, so you either want to use moves that send you airborne, knock you out of range, have throw invulnerability, or have a lot of active frames. Kara Botan (j.236S) works really well here. Tsubaki(421S) is airborne for much of its motion. And 236B Nadeshiko has some throw invulnerability on startup.
Gedo is one of the few characters you can hit with an instant air j.C, which is not hugely safe but doing it from a backwards jump can be a good surprise at times.