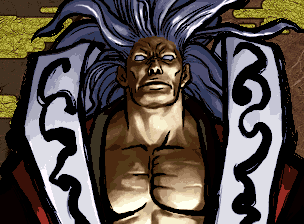 Equipped with a humongous blade that may or may not be compensating for something, this incarnation of Zankuro is far from living up to his reputation as a fearsome slayer of hundreds. Low tier without a doubt, Zankuro struggles a bit thanks to a weak pressure game and the tendency to empty his entire sword gauge upon whiffing one of his big dick ABs. Of course, this is 5 Special and you can definitely make Zankuro do some work, but it will take some persistence and matchup knowledge.

If you're worried you'll whiff, nearly every 8BC listed below can be replaced with 2BC for much greater stability.

Fastest, medium range punish with nice damage, but be careful not to get n.5A instead.

Fast, hit-confirmable punish with good damage. Using 623A will frequently result in the last hit not coming out and you being left punishable.
At max n.5B\n.2B range second hit will not connect and 623S will be blocked. Use 236C to prevent this.

The reliable combo from 6C, as 623S won't fully connect.
Shy of a deep hit, this is your only actual combo into WFT.
Swag match ender. Good luck landing it.

At specific spacing just shy of fullscreen, after 236A hits the opponent you will recover in time for 236C to combo.

Corner only. It possible to do it midscreen after 66C, but opponent must land very close, so don't bother.

Only works if you hit at the end of the active period, like during a meaty situation.

... xx 623A (one hit) n.5B xx 623A n.5B xx 623A etc 8BC
Backhit loop. Number of reps depends on closeness to corner and enemy width. The 623A finisher will knock the opponent through you, so if you corner them and use this to finish the combo you'll end up in the corner instead of them.
By itself, 623A loop is way better. But using this to finish the loop will keep them in the corner rather than knocking them back out, and the pursuit is much harder to mistime.
You won't see opportunity for it to land that often, and this doesn't combo from max distance. Very satisfying to pull off though.

On backhit 66AB opponent will be launched high, so it is your only option.

Instant j.9AB will hit standing tall characters, on backhit this will give enough advantage to start 623A loop or simply a 5AB upon landing. It's most useful if you hop behind Gaira or Gedo when they attempt to use their command grabs.

There are categories in the cast regarding this move. It hits standing and during hitstun, it only hits standing during hitstun (i.e. after a back throw weapon pickup cancel), it hits standing but not during hitstun, or it doesn't hit at all.
These categories ultimately don't mean much, because it can still be inconsistent depending on your distance from the opponent, or if their animation while recovering from an attack shrinks their hurtbox, even if it is supposed to hit them consistently while standing. But landing this backhit starter where you can results in a huge damage increase, so whether it's worth the risk of dropping is up to the player's discretion.

Since Zankuro j.C is fast and has very downward hitbox and it can be mixed up with his empty jump 2C for Issen setup.
Best scenario is to catch opponent mid air so you can issen them on landing or 2AB\n.5AB them to death. Be careful opponent will try to kick you out of concentration with j.C since Zankuro hurtbox on most attacks is bad.