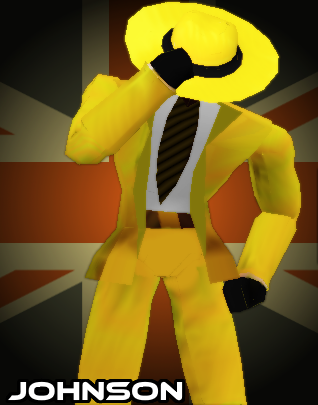 In the last few months, many people living in the city of New Langdon (United Kingdom) have reported sightings of a strange individual who sports an eye-catching yellow outfit but seems to lack any delineated facial features. This quickly caused the rumors to take the shape of a urban legend known as "the man with the hat" or "Mystery Johnson", to distinguish him from similar blank-faced creatures from the folklore. The name "Mystery Johnson" was coined by the local newspaper which reported the first sightings, taking inspiration from an online creepypasta describing a similar creature. The story went viral, generating a huge number of imitators and cosplayers around the world. In reality, the man now known as "Johnson" is a byproduct of the Schwarzerblitz experiment: apparently, the goal of the scientists was to create the "perfect shadow", someone who could sneak into any facility without being recongized. As a result, Jonhson's face appears as it is oscillating between several different features, creating a completely blurred picture. However, Johnson was just a prototype and was quickly dismissed as a failure, since only his face seemed to retain this ability. After the Euterpe disaster, he managed to reach the United Kingdom by unknown means and to survive there for one year without being found. It is said that he earns a living by working as a private investigator who can only be hired in the deepest depths of the dark web, and that, before being experimented onto, he was a high-profile member of the Encorp genetical division, fallen from grace after a huge failure. As many other stories surrounding Johnson, these could very well be lies.[1]

Johnson is a mixup character who excels at mid range. He has very good approaching tools, like his 1K (a lounging Low sweep with invincibility against High and Mid attacks), 7K (a jumping overhead with Low invincibility) and 4K (run-of-the-mill advancing pressure kick). 1K is his go-to tool to evade tricky situations, due to its extensive amount of Mid invincibility. Once in range, he can use his fast punch starters to apply pressure and mixing Mid and Low moves.

7K and 1K are especially nasty as they both lead to a 50/50 mixup. While the 1K mixup can be easier to read, due to different start times of the follow-up attacks, and the attack itself is quite punishable on block, the 7K 3K / 7K T mixup is a plain 50/50 without any good answer, aside from guessing on the spot between blocking and teching the throw.

3K cannot be blocked while in Trigger Mode, leaving no Trigger Guard chance to an opponent hit by 7K or 1K, thus making them the most dangerous tools in his arsenal.

His 214T Trigger Move is mostly an Easter egg / joke move, as it is extremely impractical to pull off. Though, standing near his fallen hat with one Bullet Counter could constitute a decent source of mind games.

Johnson can take his hat off or lose it as a result of an Impact attack. When he's hatless, he has access to a few new moves if he's standing in the proximity of his fallen fedora (a taunt and a special Trigger move).

Johnson has a good variety of fast punches and slow, but powerful kicks. His kicks are mostly used as a keepaway tool and combo filler, while the punches are his usual combo starters, due to being generally faster. Since his running tackle is a Mid, he also has access to a 50/50 mixup with his running Spiral Turban Special. Despite the amount of options in his possession, his combo damage potential without Bullet Counters is slightly sub-par, compared to the average of the cast.