Schwarzerblitz is a classical 1v1 3D fighting game with some mechanics similar to SoulCalibur, Dead or Alive and Tekken. Each character starts the match with 250 health, at the center of the stage. The round timer can be set to 15, 30, 60, 99, or infinite. The number of round can be set between 1 and 15 (first to 8). All characters share the same movement speed and basic movement options.

There are three separate conditions for winning a round:

The game uses a five buttons layout, plus 8 directions. The five action buttons are:

In addition to the five action buttons, specific macros, such as

, can be mapped to keys or controller buttons.

The movement options in this game are similar to those found in the SoulCalibur series. Pressing one direction results in the character moving around in the 3D space in that specific direction. For a character facing right, using numpad notation: 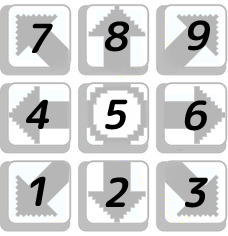 Foreground and background sidewalks circle around the opponent instead of moving parallel to the stage borders. All sidewalks make the character fully invincible against projectiles, unless their movement is stopped by a wall.

A character can crouch by pressing the Guard Button (G) together with 1, 2 or 3 and keeping 2 pressed. While crouched, the player can let go of G to keep the character in this state and make use of their crouching attacks. A crouching character is immune to High attacks (see the relevant section about attack types).

A character can also jump, by pressing the Guard Button (G) together with 7 (back jump), 8 (neutral jump) or 9 (forward jump). A jumping character has access to two or more jump attacks and is immune to Low attacks (see the relevant section about attack types). If a jumping character is hit by an attack, they will be propelled away as if hit by an Impact Attack (see the relevant section about the topic). Characters are considered airborne from the instant the buttons are pressed, but won't be able to perform any aerial attacks until frame 6.

If G is pressed during a 2 or 8 sidestep, the character will perform a standing guard instead, unless

is kept pressed. Pressing G during a diagonal sidestep will instead cause the character to jump or crouch immediately.

By double tapping 6 (4 for a character facing left) and keeping it pressed, the character will start to run. After starting to run, there is a 8 frames window where no attack can be inputed, effectively making all running attacks at least i8. If 9G is pressed during a run, the normal jump is replaced by a Run Jump Cancel, effectively increasing its range by a significant amount. Run Jump Cancel (RJC) is an effective technique for closing in to zoners.

together with a direction button, the direction will be registered twice, causing the character to perform an instant dash. This technique makes it easier to manage the distance with the opponent, as it is relatively more responsive than double tapping a direction.

In Schwarzerblitz, there are five main types of attacks:

There are seven kinds of standard attack reactions, with a set hitstun value:

Notice that throws operate with their own set of rules and can have a wild variety of additional effects. If an opponent is hit while laying on the ground, it is put in a techable Weak Impact state. Despite Weak Impact not allowing for lengthy combos and extensions, some characters can score full combos out of a restand.

Projectiles have some specific interaction rules:

Unlike most fighting games, damage scaling in the game does not depend on the number of hits of a combo; instead, it is calculated based on the amount of damage dished out during a combo, considered as a percentage on the overall lifebar. Since health is universally set to 250 outside Story mode, this translates into the following table:

The scaling factor is calculated depending on the total combo damage before the current move. Thus, if the combo has dealt e.g. 82 damage so far and one performs a 20 damage move, the applied scaling will be 40% (total damage: 82 + 20*0.4 = 90). The next move in the combo will have a damage scaling of 30% instead.

Independent of scaling, moves always deal a minimum of 1 damage. Projectiles, as well as some throws, are not affected by damage scaling. Some moves, like Evilobster's Empire State Suplex, have a reduced scaling penalty, dealing a higher minimum guaranteed damage.

When a character is knocked down, it can be still hit by most Low and some Mid attacks, causing a limited juggle state that can lead to some additional combo extension. For the actions that can be taken while in a knocked down state, please consult the relevant section.

If an opponent has its back at the wall on an open side of a stage, they can suffer a Ring out if they are hit with an Impact attack (see the relevant section about the topic). A ring out is an instant win condition for the current round, independent from the amount of health left or the amount of remaining time.

Only certain stages allow ring out - it can be toggled On or Off at the character selection screen, while selecting a stage.

Due to the unfair advantage it gives agressive play, and the existence of juggles that can ring out off of one touch, Ring out is disabled in Tourney Mode. As most tourneys use Tourney Mode, it is not taken into account when discussing character strengths and weaknesses on their pages.

Guarding an attack, much like in Soulcalibur, is performed by pressing the Guard Button (G). There is no chip damage in the game, not even from projectile attacks. There are two kind of guards:

You can switch guard even during blockstun by simply pressing or releasing 2 while keeping G pressed. Using the wrong guard (e.g. a crouching guard against a Mid attack) and being hit by said attack will put the defending character in a counter state(see the relevant section).

From version 1.1 on, there is an infinite prevention system in place to avoid infinite combos to take place. If the same moves hits the opponent more than once in a combo outside of Trigger mode, the hitstun of said move will be reduced to 70% of the normal value. If the move hits more than twice in the same combo, the hitstun is instead halved. This prevents Bullet-less loops to be a viable tactics. As of version 1.2, throws which end in a cancelable Impact will instead cause a Weak Impact if used more than twice in the same combo (this was originally added to prevent a specific Johnson infinite).

Some characters (Krave, Cyphr and Wally, as of version 1.0) have access to special stances with different movement options. Usually, a specific command is involved to transition from or to this stance. If a character is hit while in a Special Stance, they will be brought back to the standard Standing Idle stance, no matter the kind of hit.

The equivalent of EX-meter, they can be used for a variety of effects. See the relevant section for additional details.