All characters have a set of normal moves which serve as the basic foundation for their move set. Each one of the 6 buttons (LP, MP, HP, LK, MK, HK) represents a distinct normal move. There are three sets of normals, standing, crouching, and jumping, which makes up 18 normals in total for each character.

Normal moves can chain cancel in combos, making many of them useful only in a sequence of attacks instead of on their own. Although normal moves usually represent a punch, kick, or an otherwise less complex action than other attacks, some of them have unexpected properties that make them more important than more advanced techniques.

Every character has a sweep attack on 2HK (2MK for Robo-Fortune) that breaks armor and causes a blue bounce, and a launcher attack which is on a different button depending on the character.

Some characters have command normals, additional normals that require a directional input with the attack button. Command normals will generally work exactly like the same button normal in a chain combo.

Performing a special move, often the most distinctive attacks for a character, requires a sequence of directional inputs, or motion, before pressing an attack button. Normals can cancel into specials at any point, with only a few exceptions. Specials can cancel into supers during their designated frames where a super cancel is allowed (typically during some but not all recovery frames).

A super move uses 1 or more levels of meter to executes a powerful attack. Supers are the primary use of meter in Skullgirls. Supers offer a wide variety of utility, such as an invulnerable reversal, a high damage combo finisher, provide a setup, or other advantages. Supers that use more than one bar of meter have minimum damage scaling, with (typically) 45% minimum scaling for level 3 supers and a 55% minimum for level 5s.

Supers are referred to by the in-game tutorial as blockbusters, and meter as dramatic tension.

A strike is any move that can be blocked. The large majority of moves in fighting games are strikes. These attacks will cause hitstun on hit and blockstun on block. This categorization of moves is primarily useful when thinking of which moves are affected by strike invulnerability, and are not affected by throw invulnerability.

Throw moves cannot be blocked, and can be avoided by jumping, or throw teching for normal throws. 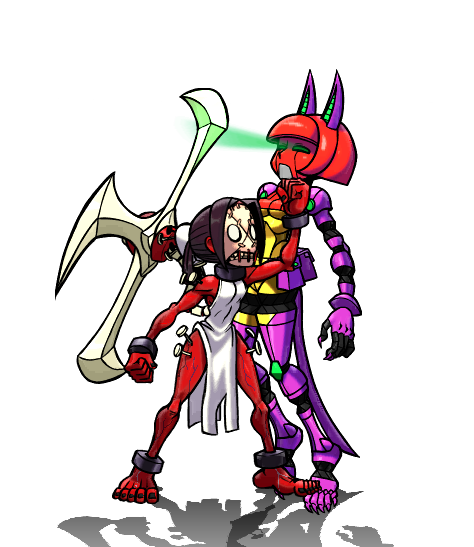 Every character has a normal throw using LP+LK. Normal throws can be stopped through throw teching.

All characters have a ground throw and an air throw, inputted by pressing LP+LK simultaneously. Throws will beat opponents who are blocking, and must be countered either by throw teching (inputting a throw immediately after getting thrown) or by jumping away. Throw teching causes both players to recover at the same time.

Ground throws will miss opponents in the air, and when they're in jump startup. Similarly, air throws will only work on airborne opponents.

A back throw, inputted by holding back and pressing throw, throws them behind and switches sides with the opponent. This only applies to ground throws, air throws cannot be thrown backwards.

All normal throws have a 7f of start up, stay active for 1f, and have a tech window ending 13f after the throw hits.

All throws come with 50% damage scaling and deal 100% recoverable damage.

All normal throws will miss opponents while they are in hit stun or block stun, meaning combos into a throw are not possible under most circumstances. Opponents in a stagger or crumple stun can be hit with a throw as a combo. Characters are vulnerable to throws on the first frame after hit stun, block stun, or after waking up. There are no additional frames of throw invulnerability, but holding up will avoid ground to ground throws that hit on the first frame after the stun, since throws won't connect during the opponent's jump startup.

Recovery after normal throws, or the animation after the hits, are be special and super canceled.

A successful throw animation are invulnerable and cannot be interrupted by any other characters or attacks on screen.

It is possible to cancel the start up frames of a normal move into a throw, but only LP and LK. The popular kara throw technique, as seen in other 2D fighters with a 2 button normal throw command, is possible but considerably more restricted than in older games. Throws cannot cancel the active or recovery frames of any move.

Throughout the wiki, the universal throw mechanic will be referred to as normal throws. There are other types of throws in Skullgirls too, such as hit grabs and command grabs. 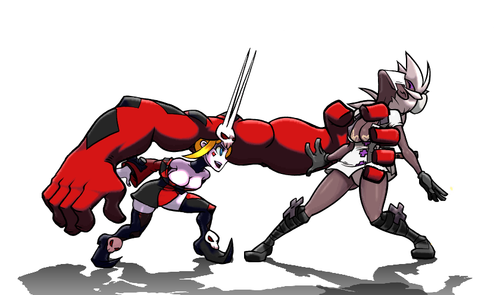 Some characters have command grab special moves, which cannot be teched like a normal throw and must be jumped away from.

Command grabs are throw invulnerable during their active frames.

If two command grabs connect on the same frame, one randomly chosen throw will succeed.

A move that can be blocked (is a strike) but has properties of throws, such as going into an invulnerable animation sequence on hit and breaking armor.

Anti-air grabs are grounded hit grabs that will only connect against opponents in the air. These moves are unblockable if the opponent is on the rising part of their jump or double jump arc. If they are on their way down, they can be blocked. They can also be blocked during double jump startup.

A type of projecile that will instantly cover its entire range and is active for a fixed amount of time.

Invulnerable moves have a window of time where they cannot be hit. Moves that are invulnerable from the first frame are especially useful as reversals. When a move whiffs due to it hitting an invulnerable hurt box, there's a small visual effect to indicate this.

Hitting an armored character will not cause them to enter hitstun, and will deal full damage, except for Cerebella (50% damage), Big Band (65% damage), Fukua (50%) and Sekhmet (25% damage). Throws, snapbacks, and sweeps will ignore armor.

An armored attack with no limits on how many times it can be hit and still negate attacks. It also cannot be broken by sweeps.

Sweeps will ignore armor, causing a hit on an armored opponent. All c.HK attacks (c.MK for Robo-Fortune) and a few specific attacks have this property.

Launches the opponent and the attacker can super jump cancel to follow up with an air combo on hit. 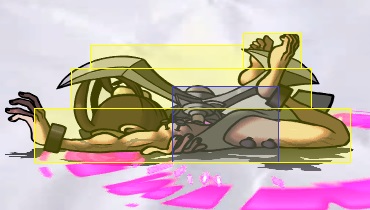 When a character falls to the floor with a red bounce, they cannot ground tech. Instead, the attacking character has an opportunity to hit them off the ground after the bounce. Hitting a character like this is referred to as an "off the ground" hit, or OTG, and can only be done once per combo. If a red bounce occurs when OTG has been spent in the same combo, it will instead be a blue bounce, which the opponent can ground tech.

A character hit by a move that causes a knockdown will fall to the ground with a red bounce, and bounce back off the ground in a hit-able state. If the character isn't hit OTG and is allowed to touch the floor again, they will land with a blue bounce and be able to ground tech.

A character hit by a move that causes a sliding knockdown will fall to the ground with a red bounce, and slide across the ground in a hit-able state. If the character isn't hit OTG, their slide will end in an untechable wakeup animation. This is powerful for the attacker, who can then setup okizeme. 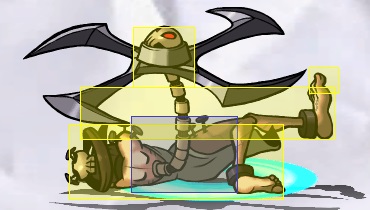 A blue bounce allows the character to ground tech when they hit the floor. With a properly timed ground tech, the attacker cannot combo using OTG.

A character hit by a move that causes a soft knockdown will fall to the ground in a hit-able state, and hit the ground with a blue bounce.

A yellow bounce puts the character in a hit-able state and will fall to the floor with a red bounce. Hitting them before the red bounce will not spend OTG. There are no limits with how many yellow bounces can occur in a combo.

The opponent will bounce off the floor with a yellow bounce and into the air in a hitable state. When they hit the floor again, it will be a red bounce.

The opponent will hit the wall with a yellow bounce and bounce backwards in a hitable state. If they touch the ground before or after touching the wall, it will cause a red bounce. When hitting the opponent with a wall bounce move at midscreen, be sure not to walk forward until they bounce off the wall, otherwise the screen will move with them and they will not hit the wall.

The opponent will hit the wall with a yellow bounce, stick against it, then fall straight downwards to the floor in a hitable state using their trip animation. If they touch the ground before or after touching the wall, it will cause a red bounce.

All assists that cause a red bounce change to a green bounce. Green bounces can still be followed up with an OTG like a red bounce, however the opponent can still ground tech after a certain window of time, like a blue bounce. 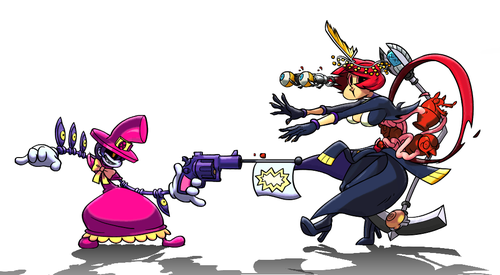 Staggers can be shortened using ← and → inputs and/or rapidly pressing punch/kick buttons. They are similar to hitstun except that throws will connect. Teching normal throws is still allowed.

A move that causes stagger leaves the opponent in a unique standing stun animation.

All staggers start with a 60f period of vulnerability to everything for the defending player, including throws which would not normally combo. Note that normal throws can still be teched. The end of the stagger animation is 20f and is vulnerable to any attack but throws.

Players can "shake out" of a stagger and shorten the stun with rapid ← and → and/or punch/kick button inputs during the stagger. Successfully shaking out of a stagger reduces the throw vulnerable part of the stagger by up to 15f depending on how hard you mash. Getting counter hit by a stagger move will not allow the defender to shake out.

After the first stagger in a combo, any additional moves that would cause stagger cause a shorter, normal hit stun instead. 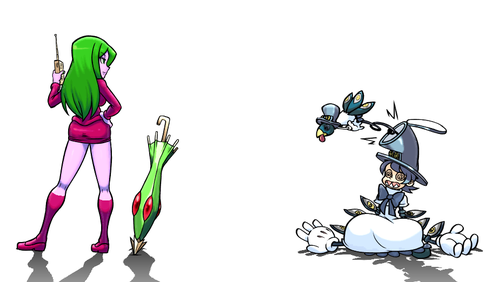 Crumples are an extremely long type of untechable knockdown.

Attacks that cause a crumple cause the opponent to slowly fall to the ground where they cannot ground tech. OTG can be used to combo off the crumple during the latter part of the animation, after the character getting hit falls to the floor. If OTG has already been used, they will become invulnerable during this time but still can't ground tech.

The character will go through an untechable wakeup animation, regardless if OTG has been used or not.

These attacks can press the button again to chain into itself, sometimes with a unique follow up move. This can be done on whiff, block, or hit.

These attacks can cancel into an attack in a way that breaks the universal chain rules, such as canceling a super into a special, or canceling a medium normal into a light normal.

These attacks have restrictions on what they can be canceled into, atypical of the normal cancel rules.

These attack's recovery can be canceled with an air dash

Painwheel specific, some of her attacks can have their recovery canceled by flight.

Robo-Fortune specific, she can cancel her air normals on hit/block with a double jump. She can jump cancel a successful air throw as well.

These normal moves can cancel into another normal move on whiff. The only normals with this property are Big Band's jLP and jMP, which can whiff cancel into a jumping punch of higher strength.