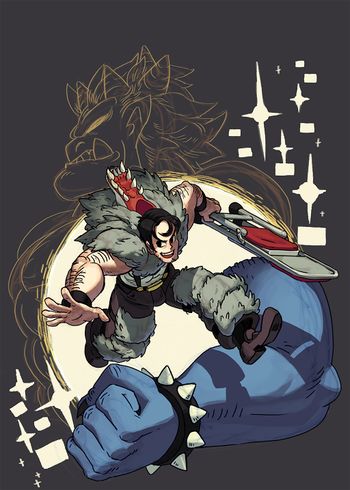 Known world-wide for felling the Gigan warrior Grendel and for his illustrious career in the ring, Beowulf had secured himself a spot in the history books as a champion. But a mediocre acting career after leaving the ring tarnished his legacy.

Now, as the Canopy Kingdom faces a new threat, Beowulf enters the ring once more, determined to relive the glory, and in doing so stumbles upon the truth about his past... Will Beowulf be able to overcome this new threat to the city and his legacy? Or is this his final taste of the spotlight?

Beowulf is a resource-based beat-em-up styled character with strong mix-ups and tremendous damage, given he has those resources. He is best at close range utilizing his fast hop-dash overheads to force his opponent to guess between a high/low/throw. He also performs well in the mid range thanks to his trusty folding chair, The Hurting.

One of Beowulf's main mechanics is his ability to remove and re-equip his chair, which gives him different abilities.

When Beowulf grabs the opponent either from his throws, hitgrabs, Airwulf, or Wulfamania, Beowulf will enter a unique Grab Stance mode where he holds the opponent in the air and can pummel them and select a wide series of "finishers" to continue the combo or position himself as he pleases. This is complimented by his Hype mechanics, where upon doing select actions, finishers, or taunting Beowulf will amass 1-3 levels of Hype.

When Beowulf has Hype he can spend the hype levels during Grab stance to use EX finishers which sacrifice a pinch of damage (except for Canis Major and Geatish Trepak) for utility effects, such as EX Canis Major (2PP while airborne in Grab Stance) with long Hard Knockdown for sajejumps and oki setups, EX Grendel Killa (4KK in Grab stance) for a strong finisher that allows normal followups, or EX Geatish Trepak (2KK with chair on in Grab Stance) to get a doublesnap when close to the corner or send them fullscreen.

Hop dash: Beowulf can do any of his air normals during his dash (although heavy normals will not come out), similarly to Sasquatch's shorthops, which allows him to do a variety of things such as: Going for a safe on block, nigh-unreacatble overhead to open up his opponent, or bait the opponent's reversal by timing a safejump from a normal or EX Canis Major. Utilizing this well allows Beowulf to overwhelm his opponent at the short range and make them fear pushing buttons against him. 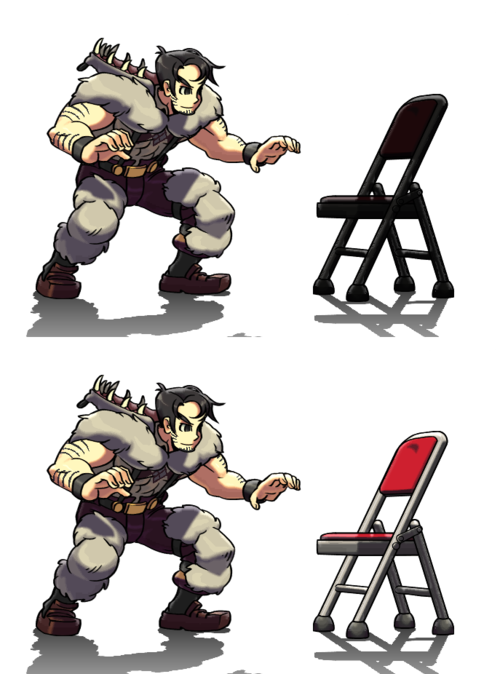 Beowulf can remove his chair, The Hurting, by using Hurting Hurl (236P) or j2HK. The normals that would have used the chair are changed when Beowulf doesn't have the chair, and he no longer has access to using Hurting Hurl, Geatish Trepak, and Striker Kick. Also, he will take 50 bonus points of chip damage per hit from all sources except from projectiles. For a period of time after the chair is let go, it stays on the ground and is dimmed. After some time, it lights up, indicating that Beowulf can interact with the chair as soon as it starts flashing. Beowulf can pick the chair back up by:

Beowulf's throw is different from the rest of the cast because, rather than throwing his opponent, he enters Grab Stance where he is freely able to pummel his opponent and position himself, a mechanic similar to older beat'em up arcade games.

When in Grab Stance, Beowulf is fully invulnerable and allowed to do a number of actions within a time frame of entering Grab Stance or until he runs out of actions.

Beowulf leaves Grab Stance when he has no actions left, when the timer runs out, or when he uses an ender/finisher.

So it is best to use as many Berserker Headbutts or Naegling Knee Lifts before your final action.

Upon entering Grab Stance, Beowulf has X frames to input an action, otherwise he will default to ending Grab Stance with Wulf Press Slam if on the ground, except in Wulfamania! where he will end with Da Grendel Killa, or Canis Major Press if in the air. The timers for Grab Stance is as follows:

Beowulf is able to enter Grab Stance up to two times normally, three times with EX Da Grendel Kila, and even more with clever use of Hype and assists. After the second or third Beowulf leaves Grab Stance, his opponent will become fully invulnerable and be able to use a ground recovery as soon as they touch the ground.

Hype is Beowulf's other resource aside from The Hurting that greatly benefits him. Hype amplifies Beowulf's ender/finishers and increases his utility by granting additional moves in Grab Stance.

Beowulf can spend Hype during Grab Stance by inputting

after the moves respective motion. When Beowulf does so, his enders/finishers will gain a property at the cost of some damage (except Canis Major Press and Geatish Trepak). (What each EX ender/finisher does is listed with their respective move.)

Beowulf has 3 different intro poses that can be selected by holding a light, medium or heavy button during the loading screen before a match.

NOTE: These tables are still WIP, mostly the notes/descriptions. - Seen