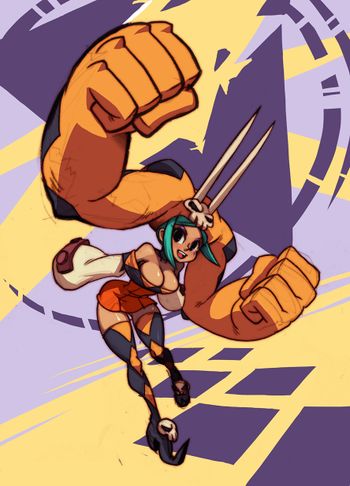 The biggest sensation in the Cirque des Cartes, Cerebella is a tumbling, soaring dynamo of star power: throughout the Canopy Kingdom, she’s admired for her enormous strength and alluring curves. Sadly, this acrobatic orphan only desires the attention of one man, mobster Vitale Medici, who took her in and became the closest thing to a father she’s ever known.

While inherently good, Cerebella serves the mafia as a leg-breaker when not performing in the circus. Cerebella is the only person capable of controlling her powerful Living Weapon hat, Vice-Versa, so Vitale is stingy with his affections to keep her fighting in his corner.

Cerebella is a grappler with a diverse tool-kit and has excellent hurtboxes/hitboxes on many of her normals. Her command grabs can turn many situations into a 50/50, and she has the tools to incorporate a variety of nasty resets into her combos.

Cerebella has 3 different intro poses that can be selected by holding a light, medium or heavy button during the loading screen before a match.

This is absolutely not a conclusive list! Bella is a popular character, and there are a lot of strong players in every region. If you'd like to be included on the list, please reach out to the wiki maintainers.

NOTE: These tables are still WIP, mostly the notes/descriptions. - Seen