The buttons are comprised of three punch (

Directions are notated using numpad notation, which uses numbers to describe directions in accordance to their location on a numpad.

Directional motions are used to execute specials and supers. Here is a list of all the motions you will find in Skullgirls:

for backwards and forwards walk, respectively

while in the air. Character specific.

while in the air. Character specific.

) while in the air to guard any mid, high, or low attack. You can still block mids and highs during jump startup on the ground while holding

and press any button after being knocked down to tech backwards or forwards, respectively.

while being thrown. Must be standing. 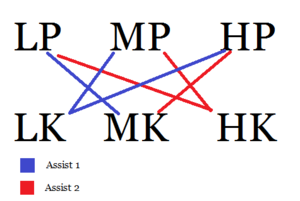 while in blockstun or during a burst to alpha counter to the 2nd and 3rd character, respectively

DHC - During a super, perform any super from the the next-in-line character

Two macro buttons can be mapped to any combination of buttons, as well as analog stick assist macros on top of that for pad players. So, pad players can have two assist macros, plus two other macros of their choice, such as dash or throw.