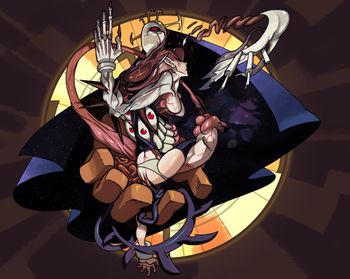 Double’s origins are a complete mystery. Seemingly without a will or motive of its own, this formless monster aids the Skullgirl.

Double is capable of transforming its nightmarish form into that of any person, but often appears as a smiling nun. It can frequently be found in the Grand Cathedral of the Divine Trinity, listening to confessions and attending to the catacombs beneath.

Double is a jack of all trades character whose moves borrow animations from other characters in the cast. Many of them have different properties than their original, and their uses are re-contextualized by belonging to a different character with a different kit. She also has some choice assists and a safe DHC that actually puts the momentum in her favor.

Double has 3 different intro poses that can be selected by holding a light, medium or heavy button during the loading screen before a match.