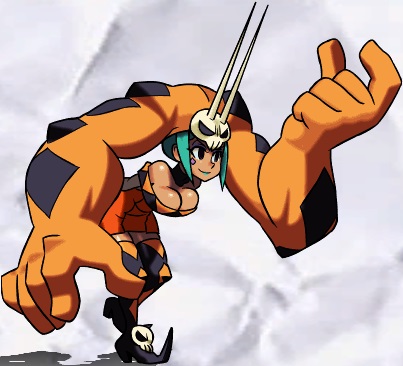 Holding either the forward (→) or back (←) directions will walk the character in the appropriate direction. Most players prefer to use faster methods of getting a character across the screen. Appreciating a detailed walk animation takes time.

Any up direction (↖ or ↑ or ↗) jumps in that direction. All characters have equal jump heights. Jumping has a 4f start up before the character actually leaves the ground. These 4 jump start up frames make the character invulnerable to throws, allow blocking against high or mid attacks, and restrict the character from blocking low attacks. If getting hit or blocking an attack interrupts jump start up the defending character will remain standing. Most special moves can only be preformed once per jump, similar to an air dash or a double jump.

All characters can super jump, a longer, higher, and faster moving jump, by tapping any down direction before any up direction (↓ then ↑). Assists cannot be called during a super jump, but everything else works the same as a normal jump. Launchers can be canceled into a super jump in any upward direction by holding up during the attack or tapping any upward direction after it hits. During a super jump, any attack will turn the attacking character around to face the opponent if the jump crossed over the opponent. Super jumps have 4 frames of jump startup just like normal jumps, except for Cerebella, whose super jump startup is 5 frames.

Double jumps have a 4f start up similar to a jump from the ground, but does not give invulnerability to throws of any kind. Getting hit or blocking during the start up frames still counts as the one double jump allowed for the jump. On the ground, holding an upward direction during any another action will start a jump as soon as the character returns to free state. This is not true for double jumps; holding an upward block direction (↖) will not make a airborne character immediately attempt a double jump when at the end of a hit stun.

If a character interrupts a dash or run with any other action, the character will preserve momentum from the dash. Interrupting a dash with a jump will send a character much farther than jumping from neutral. Careful use of a dash jump can send a character above a projectile and across the screen in a single leap or slightly change a jump arc to land an ambiguous cross up attack. Exact timing and range for this technique varies between different characters with different dash properties, but becomes particularly useful for characters without an airdash. 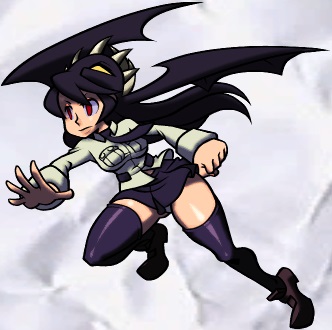 During a jump, either dash command will preform an air dash. Not all characters have an air dash, but those that do can use it once per jump. An air dash can be freely canceled from normal move at any time, making an air dash an extremely useful tool to reduce the recovery on air normals. Air dashes can be interrupted by attacks only, and don't allow blocking or jumping.

Characters with an air dash can instant air dash as both an offensive tool and a way to increase overall mobility. Instant air dashes are preformed by either double taping an angled jump then the horizontal direction (↗ then →) or by jumping then immediately hiting PP (↗ then PP). Both will result air dashes as low to the ground as possible.

Characters do not regain their air actions (double jumps or air dashes) when they land. Instead, they regain them after they jump on their own again. This means that if you double jump, then get hit before you jump again, and that hit sends you in the air, you cannot double jump. Performing some moves will regain air actions as well.