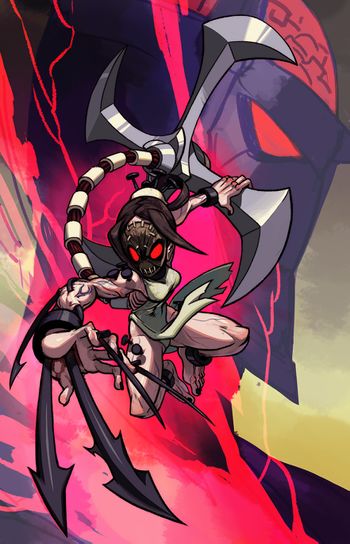 Once a normal schoolgirl named Carol, Painwheel was kidnapped by Valentine and delivered to the Anti-Skullgirls Labs' secretive Lab Zero. There she was implanted with the synthetic Buer Drive and Gae Bolga parasites and infused with experimental Skullgirl blood, transforming her into the monster she is today. Violent and unstable as a result of these experiments, as a precaution she's mentally controlled by Lab Zero's powerful psychic director, Brain Drain.

Fueled by rage, she draws her power from her pain and fury. Despite that, the soul of that scared young girl still lives on inside this monstrous body, desperately fighting off the onslaught of voices that would control her.

Painwheel has the ability to fly, which is used for mobility and its cancel abilities. She also has a special kind of armor on many of her normals called Hatred Guard, which deals back damage taken to the opponent. 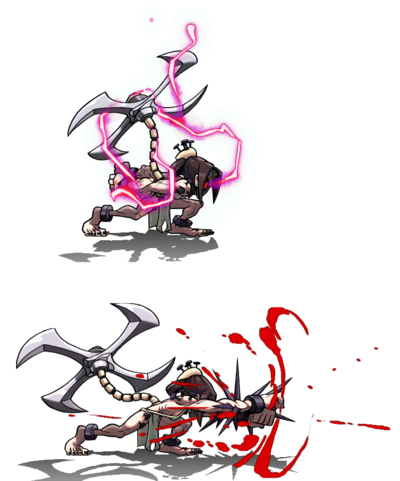 Painwheel's 5HP has Hatred Guard. She can hold HP to get armored startup frames, and release HP to attack.

The startup for Hatred Guard normals is listed as

Armor startup frames
(Additional armored frames from holding the button)
The rest of the startup, which is also armored if held

Add the 1st and 3rd numbers to get the unarmored startup. Add all three to get the held button startup.

Painwheel has 3 different intro poses that can be selected by holding a light, medium or heavy button during the loading screen before a match.