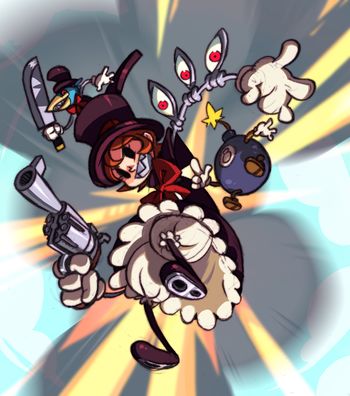 Once a war orphan slave named Patricia, Peacock’s body was gruesomely mutilated by slave traders that captured her. She was rescued by Dr. Avian’s Anti-Skullgirls Labs, and rebuilt with a reality-defying arsenal of biomechanical weaponry: the Argus System augmented her body, and the Avery Unit gave her access to unprecedented weaponry.

Alas, they couldn’t do anything for her mind: Peacock’s damaged psyche and abiding love of cartoons shaped her new “toys” into a terrifying gang of cronies, who she has no qualms using to paint the town red... with blood. Terrifying as she is, she may be the kingdom’s best bet against the Skullgirl.

Peacock is a zoning character whose goal is to fill the screen with garbage and not let the opponent close in on her. With all her projectiles and runaway tools she can slowly chip away at the opponent's health and build lots of meter in the process. Her damage output on a clean confirm is phenomenal, too.

Peacock has 3 different intro poses that can be selected by holding a light, medium or heavy button during the loading screen before a match.