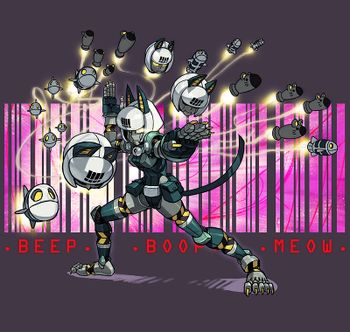 Robo-Fortune is the creation of Brain Drain, the psychic director of ASG Lab Zero, and stands as a testament to her maniacal creator’s unmatched pride and petulance. Built to demonstrate loyalty and cunning, Robo-Fortune fails to deliver either to any measurable degree. Employing cutting-edge technology, she sets out to hunt down the Skullgirl, and to engage in easily avoidable conflicts.

Is the ASG Project’s latest creation the ultimate cybernetic soldier? Have Brain Drain’s mechanical machinations set the world on a treacherous path? Is Robo-Fortune’s faulty programming more of a feature than a bug? Has science gone too far?!

Robo-Fortune is a zoner/keepaway character who uses her amazing mobility, Headrone special moves, and beam projectiles to keep the opponent far away and frustrate them to no end. She also has one of the most powerful assists in the game, which makes her a useful teammate for any character in the game.

Robo's 2HK has her shoot out heads that follow Robo around. Each of her three 214K special moves will spend the heads. Headrone RAM (214LK) and and Headrone Impact (214MK) will use one head. Headrone Salvo (214HK) will use all the available heads, and powers up depending on the number of heads you have. Each of these moves cannot be done without at least one head. She can have up three Headrones out at once. Doing 2HK with three heads will still execute the move but replace a currently stored head.

While in Det Mode, Robo's heads can be spent on a new special called Warranty Extension (214P). This move allows her to use up 1-3 heads (depending on the button strength used) in order to add more time to her self-destruct timer, at the cost of permanent health damage that increases as she spends more heads.

Robo-Fortune has 3 different intro poses that can be selected by holding a light, medium or heavy button during the loading screen before a match.