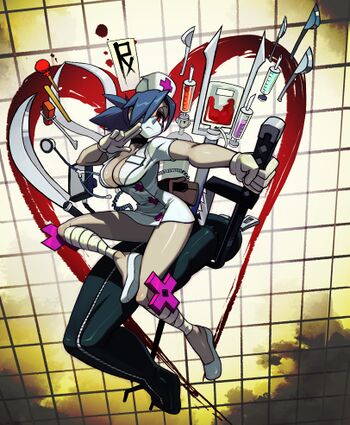 Valentine is the only survivor of the Last Hope, a group of special Anti-Skullgirl Lab operatives. Before meeting their end at the hands of the Skullgirl, the Last Hope worked for the mysterious Lab Zero and performed duties ranging from reconnaissance and sabotage to advanced research.

Now Valentine dutifully serves the Skullgirl, carrying out her will from the shadows. She keeps to herself, so much of her true nature and personality are unknown.

Between her fast run and air dashes, large disjointed buttons, and her plethora of movement options, Val has some strong offensive tools to stay in her opponents face. But make no mistake, she can use all these tools to also play surprisingly defensive when she needs to when added with her safe air fireballs. With the right assist, she can load poison vials and apply their status effects in the same combo, giving her combo game a plethora of possibilities.

Valentine has 3 different intro poses that can be selected by holding a light, medium or heavy button during the loading screen before a match.