From Mizuumi Wiki
< Street Fighter: The Movie
Jump to navigation Jump to search 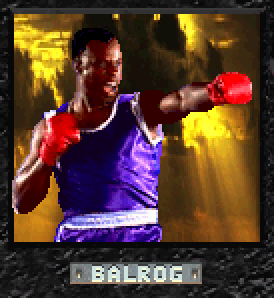 The boxer is named Balrog in all versions of the game, due to the movie using Capcom USA's character name changes in the Japanese dub.

Balrog excels at rushdown, not unlike his traditional Street Fighter II equivalent. Thanks to the shorter charge duration of this game, Balrog is able to do his charge attacks in much quicker succession. Due to the actor's much shorter arm length compared to that of the sprite-based boxer of Capcom's game, his normals have less importance in controlling space.

With Reflect Glove, Balrog can shut down any projectile spam that his Buffalo Headbutt cannot safely evade, as he can simply stand in place and push fireballs and other objects away as long as he likes.