Garuda's EXCEL Theory is unique. Despite having the same set of grounded non-command normals as Ryu and Ken (except for Ken's 5HK), his EXCEL combos are nothing like theirs. While other characters are limited by moves only dealing half of their damage and dropping down to 2 damage after using them more than once, his fast, multi-hitting special moves allow him to break this system and abuse it.
All hits of his 236P deal 2 damage, all but the first hit of his 623P deal 2 damage, 623K and 41236K deal more than 2 damage on each hit outside of EXCEL, but during EXCEL this makes no difference, since they don't drop below 2 damage.
As you might have guessed already, all he needs for his EXCEL combos to deal damage is multiple 236HPs and one 623HP as ender. Each 236HP will do 16 damage, from startup to the 8th hit, it takes 29 frames. EXCEL duration is at 150 frames.
So getting three 236HP is ideal, as it allows for enough time to hitconfirm using a normal into 6HP to move forward and not have hits of the third 236HP whiff.

On the ground, your usual EXCEL start will be 5LK, as it is the most comfortable and reliable. 5LP will whiff on crouching opponents, starting with a 2LP or 2LK might lead to accidental 236HP if not input properly. Using a medium normal as starter is also an option for slightly more damage.
It is enough to just do 5LK 6HP, but for more damage with increased difficulty, you can add one or two heavy normals, ideally 5HP and 5HK. What this entails is that you cancel 6HP on its first hit as soon as possible, without getting 623HP to come out. The 4 damage of the second hit will waste time for doing 236HP. There is also the possibility of 5HP and 5HK whiffing on small crouching characters or due to range issues.
In most of those cases you can still add at least one by doing 2HP 6HP.
For anti-air EXCELs, 5LP or 5MP are your go-to starters. These work basically the same as grounded EXCELs. You get the hit, check the opponents height, combo into 5HP to add hitstun so that for the delayed 6HP they can drop lower, as it is possible for 5LP 6HP to not combo if done too high.
After landing 6HP, you need to get a feeling for the 236HPs. It could be that there is not enough time to do all three or maybe you need to cut the last one short to cancel into 623P.

Spending more than 1 gauge works almost exactly the same. Instead of doing three 236HPs and ending with 623HP, you only do two and end with 41236HK.
Due to gravity changes in EXCEL, this move won't launch your opponent up into the sky, but rather leave them at the perfect height for a charged 214214K super. After this, depending on the character, you either cancel into 214214P on smaller characters, or you let the fully charged super hit them and jump after them. During your forward jump you activate EXCEL, hit them a jHK, cancel that into jLP so that it whiffs and you aren't stuck in hitstun, making you land earlier and from there you keep the combo going like you would on anti-air combos.

Any hit you land with Garuda, you want to confirm into his 623HP. This will give you both the highest damage and best knockdown advantage. Doing so can and will be hard, as 236P is plus on block and will also knockdown, but deal less damage and leave you less advantaged.
One thing to note is that all EXCEL combos can be started from a jump-in. This is quite rare, as it requires the jump-in to hit deep enough to land and activate EXCEL. In the cases where it does happen, the jump attack tends to add roughly 20 more damage, meaning that his 3 gauge combo on bigger characters will kill, dealing 204 damage.
The combos starting with 5LK 5HP 5HK and ending in 41236HK are pretty damn hard if you want to get all hits of 236HP, so if they are causing issues, just remove the 5HP.

2LK, 2LK, (2LK)
4 dmg, third 2LK for 6 dmg is character specific
Your best option for confirming off a low.

2MP, 5LK
17 dmg
Nice to know about if you have trouble confirming into 623HP off crouching moves.

5HK, 2MK
35 dmg
Stylish and his highest damage confirm, but unlikely as it whiffs against crouching opponents.

Managing your meter with Garuda is just as complex as his EXCEL theory. Just do it.
On a more serious note, you should avoid blowing all your resources on 236HP xx 236236P, but since it leaves your opponent backturned on their wakeup, it is still quite the strong option. Just like other characters, you want to manage your resources in a way that lets you participate in the mindgames that come with delayed super cancels and EXCEL activations.

Faster than the average Guard Break, but no real utility. Other characters do benefit quite a bit from punishing whiffed moves with such a slow option. Doing so with a full gauge will allow to start an EXCEL loop off a jump-in. In combination with the Guard Break, this will add a chunk of damage while also building back 8 meter on the jump-in.
For Garuda, this is not possible, as his EXCEL combos do not loop nor build meter.
Landing one into full combo though will build back 32 meter and deal 85 damage.

EXCEL block strings
Just try to keep things tight and continue the pressure afterwards. The cancels make it easy to avoid gaps and 236LP will keep you advantaged.
Ending in 623PPP is also possible, but unless your opponent is panicking and whiffing big moves, this is not recommended.
To get a feeling for how it could look:
5LK 6HP 236HP 41236HK 236LP

P throw safejumps Frame perfect safejumping, by only holding up/upforward and whiffing air normals as means to frame kill. The followups of successful jump-ins are usually limited to jHK 2MK xx 623HP#
This safejump has 5 different categories, which decide whether or not it will work on a character:

For some reason, the frame advantage of this throw depends on the "weight" of a character. The lighter the character, the higher the frame advantage. While the difference between 1, 2, 3 and 4 is minimal, try throwing Darun and observe the height of him going into the air. The auto-timed safejump will NOT work on those two characters.
Garuda, Jack and Shadowgeist are all covered if their reversal of choice is slower than 6 frames. 5 frames in the corner.
For Sagat it is 5 frames midscreen and 4 frames in the corner, but he is a very special case. His 214214P and 214214K supers are both only 2 frame startup before their super freeze, but 214214P is at 2+3f, meaning it will hit. 214214K with its 2+8f startup can be blocked by empty jumping, as the first hit during the post-super freeze will whiff on Garuda while he is in the air. This one is less of an issue, as only the first hit connects, making Sagat spend 1 gauge on 8 damage. Both of them can be baited and punished accordingly through empty jump and EXCEL usage. His meterless options are all covered by this safejump. 623P will be blocked, while jHK will hit him out of 623K airborne due to its lack of invulnerability. This will force your followup to be adjusted.
All characters in the 2nd category are covered if their option is slower than slower than 3 frames. This goes down to 2 frames in the corner and should cover basically everything, as it lands on frame 3 if whiffed, but still connects otherwise. Vulcano Rosso is a good example. Outside the corner, he will catch the jump-in with his 214LK counter, but you still land in time to block. While in the corner though, his 214LK will not be able to do so, making it whiff completely. He is also one the candidates for unique escape options with his 236K command dash getting him out.
For the 1st category, it is 2 frames or slower, both midscreen and in the corner, but beware as the size of these characters will cause some issues. Area for example can just hold downback and make jHK whiff. This can be avoided by using jHP, but doing so will just let her hold back to also make the jHP whiff. Even against jHK, some special moves will let them completely avoid the jump-in. In Pullum's case, a reversal 214K will allow her to escape. Usually, this is only a minor inconvenience as a grounded normal after landing will win and can probably be option selected.

This is what the sequences look like for the four categories:

Kara 6HK EXCEL As mentioned above, this is the only normal in the game that is airborne on its first frame. Other buttons may look like they are airborne, but this is rarely ever the case. For example, Area's 6MK is a hop kick, that visually leaves the ground and will dodge lows but is not airborne. The same applies to Guile's 4MK/6MK and Blanka's 5MK and 5HK.
What this means for Garuda is that through kara cancelling his 6HK into EXCEL, he will be airborne during EXCEL freeze. The kara cancel is performed by inputting LP or MP 1f after 6HK. This can be done like how one would plink buttons in Street Fighter IV.
In an ideal situation, you will do kara 6HK EXCEL after landing a really deep jHK, like after his P throw safejump. If done correctly, your opponent will be in too much blockstun to counter EXCEL. Just holding down the buttons during EXCEL freeze won't work and trying to activate it manually must be done in the very tight gap right before jMK, with its 4f startup, hits. With proper timing, this too will not work and make the jHK 6HK~MP jMK a true blockstring.


The blockstring that follows can vary between empty low, overhead low, double overhead low and triple overhead low. Garuda is airborne for 11 frames.
So in theory, an empty 2LK would be 17 frames, as it would add 1 frame to go from standing to crouching. Overhead lows should ideally be done by making jHK whiff after the initial hit, as this will make you land faster. For double overheads, any two normals work. Triple overheads require two 4f and one 5f jumping normal. So depending on what you want to do, you will have to vary your normals. In any case, whiffing jHK after connecting a hit will reduce the hitstop in the air and allow for easier combos, you should always aim for this.
A hitconfirm can be auto-piloted by inputting 6HP.

Here are a few examples for blockstrings:

623P
Invulnerable reversal, use it wisely.

Kara 6HK EXCEL/throw OS
So instead of using Kara 6HK EXCEL offensively, you can option select throws with it. If your opponent can be thrown, a K throw will come out. If not, you will EXCEL, and by doing so with 6HK, you can get the offensive options if you are in range.

Kara j214214P vs anti-air EXCEL
By buffering 214s during jump-ins, you can punish your opponent if they go for anti-air EXCELs. All normals, including jHK, can be super cancelled quite late. So by buffering 214214 before the EXCEL activation, you can kara cancel it into super by just holding down a P button during the EXCEL freeze.
If they bait this, they will get a punish. 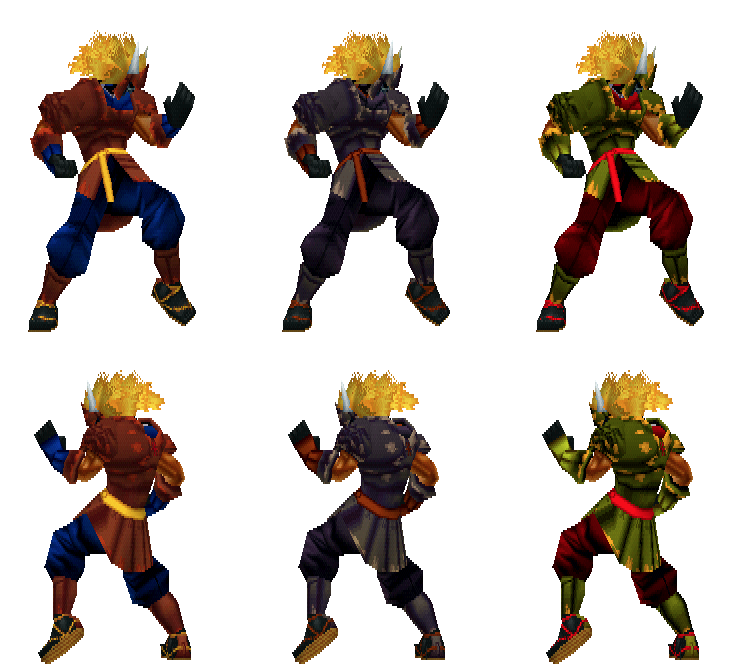