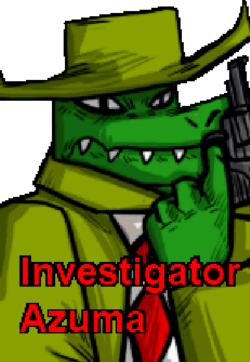 Azuma has been a crime scene investigator (get it?) in the police force for over 15 years.
His tough attitude and tall stature may give him a commanding presence that intimidates both criminals and colleagues alike, but he is a caring and kind gator at heart.
He rarely ever shoots his gun outside of the shooting range, but is well known among the police for his speed and accuracy. Whenever the police are investigating anything that may be only a little dangerous, they are always sure to bring Azuma along. Ever since he lost his best friend and sidekick in an incident with the mafia, stress has taken its toll on him. To make matters worse, his wife has fallen ill with something doctors can’t quite identify. For the sake of his wife and his mental health, Azuma has taken leave from detective work for a while, but he knows he can’t relax completely. If he’s truly needed for an investigation, he won’t be able to say no.

Also known as Azuma-keiji, or Investigator Azuma in English.
The community refers to him under a few different nicknames, they are: "InAzuma", "Azuma", and "Deka".
This resource refers to him as InAzuma, although others may vary. 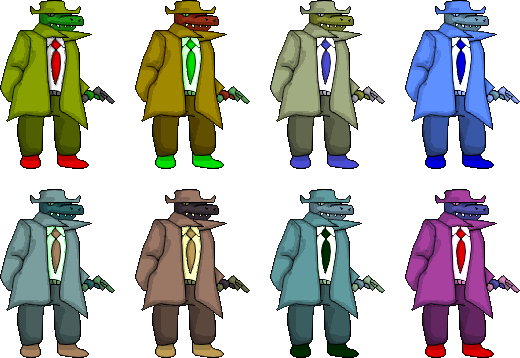 One of the slowest characters in the game, Investigator Azuma is a long-range bully using GUN.
He builds meter so that he may shoot U1, which is his lifeblood. Simply put, hit shots so you can hit the bigger shot. As such, his offense and defense are severely lacking outside of his GUN, forcing him to make difficult decisions on meter spending and relying heavily on parries to keep himself alive and to clinch out rounds. Sounds bad right?

Despite all this, GUN is one of the best tools in the game, being an insanely disjointed poke that invalidates match-ups by itself.
It props up this character solely and allows him to compete as a top-tier despite his insanely weak moves and very simple gameplan. (Which of course, is to shoot his GUN.)
He has some obscure FB-bonus combos but he mainly relies on counter-hits and air-hits to put distance between his opponent and him while he scrounges for every last scrap of meter so that he can do Ultra 1 again.

As one of the simplest characters, he lacks very much in tech.
Although there are a few odd things he can do, they're listed in the move-list section of this page in the descriptions, so don't worry.

(Note: There's not really unoptimal or optimal combos for this character.
These are the only combos more or less and they almost all involve U1, very easy to learn.)