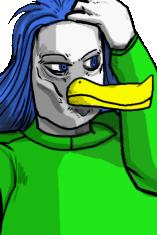 Buttobi was the leader of a large biker gang ever since graduating high school. His glares could strike fear into every person in the room, and he had the guts and strength to match. Everything changed one night when he crashed into a young girl in a biking accident, killing her. He ended a person’s life for the first time, and it was a devastating feeling. While recovering in the hospital, he vowed to give up his outlaw ways, and he stepped down from his gang. If trouble were ever to come his way, he could still hold his own in a fight.

Buttobi is an interesting character mainly for his lack of diverse animations- his B and X moves all share the same animations, but change Buttobi's momentum in different ways. With Hang-On, Buttobi operates as a trap character, forcing his opponent to block a mixup or two while dealing with his biker friend. With his Ranbu, Buttobi is purely footsies-oriented. Either way, expect to be using a lot of j.B and j.X, basic jab pressure, and tick throws. Buttobi's not a character with a lot of gimmicks, and you'll have to play solid if you want to overcome the more tricky members of the cast. His standing hitbox is also somewhat shorter than expected, only going up to his beak, so he is not as big of a target as he looks.