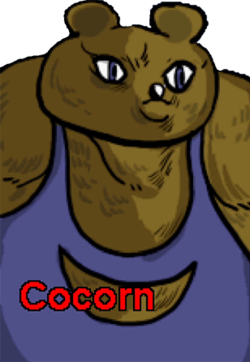 Cocorn was raised in poverty by hard-working parents that did all they could to provide for him.
He understood from an early age that he would have to work hard to escape the debt of his family.
Through struggle, sacrifice, and barley he became an amateur professional wrestler that is well known for his aerial techniques.
It earns him money, but the contracts are short-term, so his funds still aren’t stable.
Cocorn woke one morning to find that an entire village had sprang up overnight outside his doorstep.
Travelers from a distant land, escaping a war had come to the forest to seek refuge.
Cocorn was also taught by his parents to help those in need, so he did his best to help these people but what he needed most was food.
With winter fast approaching, he was running out of time. So he turned his sights on gaining the World Championship's Grand Prize. 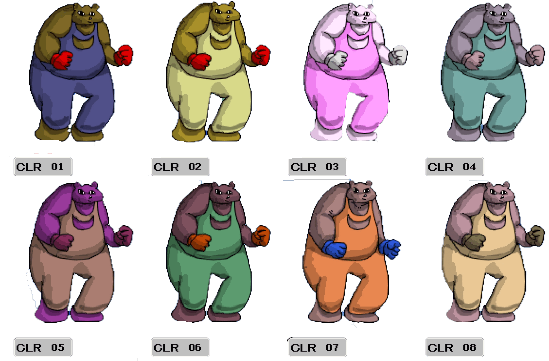 A grappler, with Vega-claw and a DP.
Capable of massive damage through easy combos or bullshit Ultras.
Unlike Razuma, he has absurd movement thanks to j.X, so there's little to no reason to run any other type besides Stamina outside of memes since his Ultras are extremely good.
His size is his most significant weakness, maybe every once in awhile if he's not flying with j.X he might have to air-parry? Honestly just run Stamina.

Depending on what Ultra you pick he plays slightly different, either go full grappler or embrace being NOT-A-GRAPPLER-BUT-A-"GRAPPLER" with U2.

5X2X
Press 5X, then hold 2X. If you win the exchange, rinse and repeat.

Miscellaneous Command Grab (5X/U1) Tech
After either 5X or U1 you can choose which side you want to go to by holding that direction.
After 5X you can buffer U1 (this works with any grounded move but is only really useful with U1 and maybe 5X) and you will be in the air while doing a grounded move.
This kills some recovery frames and makes the U1 harder to escape if they can't reversal. Other than that it is mainly a visual glitch.

5EX,KC
Cost: 1.5 meter
Invincible forward attack canceled into Neutral. Same as above but Blues travels forward.
Allows you to escape the corner for 1.5 meter. Cancelling after the first hit of 5EX allows you to pop the opponent up with 5B.

For the Barley by YFDHippo