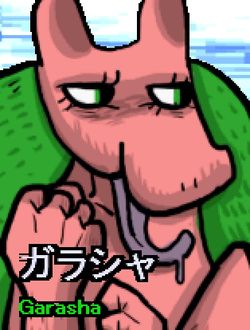 "What in the everloving goddamn fuck are you doing, you brainless shit?"

Garasha just wants to be left alone. He hates seeing people, he hates talking to people, and he especially hates people being nice to him. He’s perfectly content to spend his days in a quiet alleyway surrounded by garbage. The local people in town are well aware of him, and children have learned to play far away from where he sleeps.

The whiff punish god. Garasha uses his 5X, 5EX, and j.X to capitalize on his opponents mistakes and control the round. When he needs to go on the offensive, he has a hop dash he can use to close distance and can safely poke with his sliding 2B. j.2X is also a threatening approach tool, as on whiff it has no landing recovery, allowing for it to be followed up with 2A, 2B, or throw immediately after Garasha touches the ground. Despite not having many combo routes, Garasha will output a surprising amount of damage from his 5EX. A good character to put anywhere on a team.