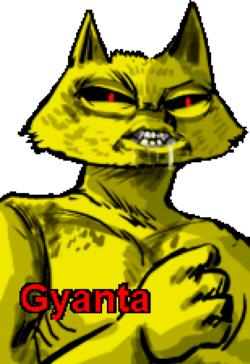 Mysterious adversary.
An extremely powerful Pomeranian with a striking resemblance to Kyanta.
No one has ever fought them and survived.
They only care about strength and nothing else.

If Akuma and Elena had a baby more or less. (Don't think about it too hard.)
In fact, taking that a step further, (setting aside the fact Gyanta has reduced HP/Boko) Gyanta is just a worse more meter-hungry Kyanta.
Almost exclusively picked by people who are too good for Kyanta but apparently not good enough to pick another character.
Relies on his Ultras to carry himself through neutral, shares a lot of issues that Elena buttons have.

As already stated, plays like Kyanta but worse.
Gyanta trades:

This character seriously can't do much of anything without meter outside of his overwhelming buttons, play Kyanta instead if you're looking for a more stable shoto.

Gyanta doesn't have any tech that is very important to his gameplan. He is an extremely straight-forward character.
The most practical tech Gyanta has would probably be that he can jail the opponent into 5Y Raging Hellhound off a jab on block and hit as well as K-Canceled attacks at certain ranges.
He has a special cancel in 2EX>U2, but it only works for 2EX>U2 so it's more of a combo-tool than anything.
Launching the opponent (usually with knockdown like Taunt, 2X, or 5EX into K-Cancel) or anti-airing them close enough to the corner can lead to J.EX loops
Taunt has a hitbox which knocksdown on hit and can be comboed into from jab but you have to be close to get it to work.
There are some situations where you can juggle long enough with J.Y or 2Y to land another J.Y or 2Y but this is very situational and not likely to come up in a real match
You are probably noticing by now that outside jailing into Raging Demon any tech Gyanta has is highly situational, gimmicky, and/or not very rewarding.