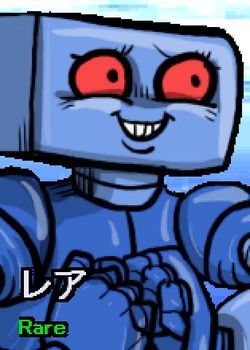 Rare was originally designed to be a war machine by the brilliant Dr. Komachi. However, Komachi quickly became bored with creating such destructive weaponry, so he gave Rare unique gadgets and programmed him to have personality. Seeing this as a gross misuse of funds, the government that commissioned Rare kidnapped Komachi and brainwashed him with harmful drugs to make him more obedient. Komachi began working tirelessly to create Rare Mk2, becoming very weak from the drugs and sleep deprivation. Rare escaped from the laboratory and swore revenge, taking Komachi’s robot Maid, Myusha, with him. He hopes that he can find a genius programmer that can give him the combat upgrades he needs to get his revenge.

Rare is a powerful trapping character that uses his stationary fanblade projectiles & Ultra to apply pressure and boko. He can cross up with his projectiles using his air attacks that give him superior horizontal movement, j.B and j.X. If he is able to connect with all the hits of his j.EX overhead, it's the most damaging move in the entire game. He has a long-reaching and fast jab, a useful slide for going under projectiles, and passable anti-air attacks. Unusually, his crouching hurtbox renders him immune to attacks that do not cross up while in the corner. He excels on any spot on a team, and is happy with any Type with Ultra access.

Demon Rare is a bit of an oddity that has seen some play lately and mostly revolves around j.EX's incredible damage output for extremely high damage confirms.