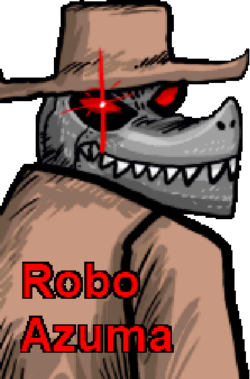 Robo-Azuma? Azuma-Robo? is a robot created by Michelle, designed to mimic Azuma’s appearance. It will carry out its orders at any cost.
It can be found late at night in dark alleys, capturing those who cross its path to take back to Michelle’s lair for experiments.
It will fight back when in danger, using its drill with deadly force. In an emergency, it can self-destruct to keep its internal data confidential.
When its synthetic skin is off, it is in combat mode, ready to use its full strength and weaponry.

The community refers to him under a few different nicknames, they are: "Razuma" and "Robo".
This resource refers to him as Razuma, although others may vary. 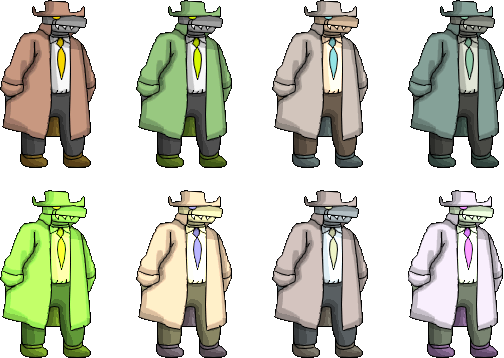 Razuma plays as a sort of "reversal-powerhouse", having little-to-no-range due to his incredibly slow speed, forcing him to rely on parries or EX moves to cover distance.
But what he lacks in speed, he makes up for in moves, he has some of the safest and strongest moves in the game, his full kit is full of ridiculous buttons and he relies on leveraging these huge pokes to get things done.
Not only that, but thanks to his odd U1 and his ability to crouch-slide, he gains extreme TOD potential and has complete control over opponent's boko-bars. You never want to be caught blocking against Razuma.

Just in general, you're playing an uphill battle with extreme reward, one slip-up on the side of the opponent can be certain death.
Often times, Razuma just can't get in due to his speed, forcing him to drop meter or make trades to get things done, some MUs are just complete hell for the poor gator.
Keep in mind, one of the hardest characters, Razuma has to work twice as hard for these things.

As the name implies, you crouch and slide across the ground.
It's performed by holding 3 or down-right, once the combo-counter hits 6-hits, you'll stop moving forward.
It's a pretty unique movement option, allowing Razuma to approach despite his huge hurtbox at times, but mainly to extend his 3A-jab combos.

His 3A-jab combos are the corner-stone of why this movement is so important, every jab can extend for mulitple hits and a potential follow-up, along with it being one of his safest pokes.
It builds tons of meter, does lots of damage, on block it has no drawback, meaning you can infinitely jab an opponent in the corner until their boko-bar breaks or they red-parry.
A great way to mix that up, is to approach with U1 already primed, then activate U1 upon hitting the half-way point on a boko-bar break. Forcing the opponent to try a risky option or risk a full boko-break combo. 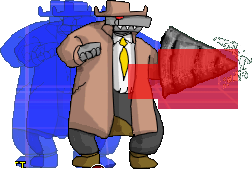 Yep. Just as the name implies, you can carry players off knockdowns using U2 due to it's multi-hit nature.
It's extremely good at carrying fullscreen, although you won't get much damage.
It's important to know and take advantage of this carry to even up the disadvantage between U1 and U2.

Razuma's Ultra-1 has special notation, starting it is referred to as "U1 Prime", while using it after it's activated is referred to as "U1 Activate".
Simply putting "U1", by itself means to activate and prime it as one full use. You will usually see that the most, but PLEASE make sure to properly notate it.