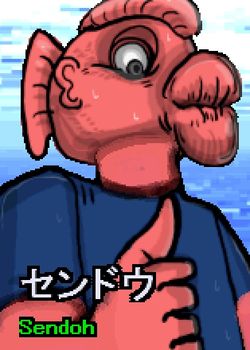 Sendou is an athlete, environmentalist, and all around great guy. His philosophy in life is that having fun is the best way to improve at anything, and he has a lot of fun with just about everything he does. He has become a living legend in the local community for his feats of physical strength, community service, and engagement with the youth. At the recommendation of others, he’s started a low budget web video series called “The Legend of Sendou” to share his love of nature and fitness with all of Japan. His naturally enthusiastic attitude has become especially popular with children.

The fastest character in the game. Sendou's speed makes him extremely pesky to deal with, and a recent buff to his 5B gives him nice combo potential, consistently allowing for meterless knockdowns. Aim for a "hit-and-run" style game, interrupting your opponent's game plan and being generally annoying. Damage will add up quickly with opponents that get impatient against Sendou, while the fishman's ability to move in quickly with throw prevents his opponents from turtling.