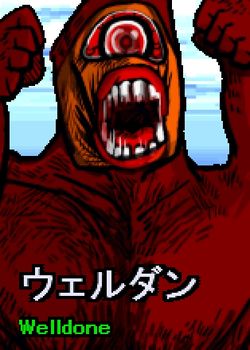 Well Done is an alien from a far away galaxy that exists only to spread destruction and misery. He has both incredible physical strength and mastery of an incomprehensible cosmic energy. He has the power to destroy entire planets, but simply destroying a planet is boring to him. He much prefers to go to a planet with intelligent life and create chaos, toying with people and killing them one by one until there’s no one left. He has selected Earth as his current target, and he is taking things even more slowly than usual. He seems to have some goals in common with Michelle, and is working together with him to cause all kinds of mayhem.

A Sagat-esque Cyclops that suffers greatly from not having an anti-air attack. The only move that reaches up to his head is his high fireball, and nothing else extends past that. Since he can only have one fireball on the screen, it's impossible to effectively anti-air someone jumping over a fireball.