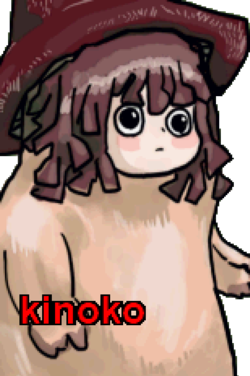 Kinoko is a great addition to many recipes.
The edible portions of a Kinoko are the head, hair, and tail.
The wild Kinoko has become increasingly rare due to people overhunting after its newfound popularity in cooking.
It was added to the IUCN Red List in 2019. 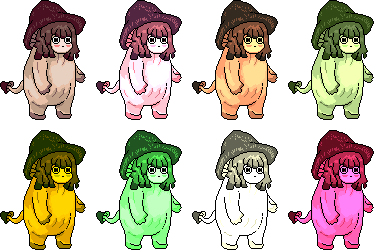 Despite being the most common character for beginners and "very original people" to pick up, this character is absolutely not beginner friendly.
Kinoko is a confusing character that is missing multiple core tools of the game, lacking completely in ground buttons and specials, but they make up for it with very weird and janky gimmicks.
Sporting the best air buttons and air control in the game, a mushroom gimmick that appears when she's in play, and being one of the few characters with natural cancels.
This gives her some of the most polarizing match-ups and extremely varied difficulty curve that requires you to have a very good grasp of a lot of the mechanics.
In general, this mushroom is Kinoko's lifeline. Be it for meter gain, bypassing other projectiles, healing, or for cancel-only combos. 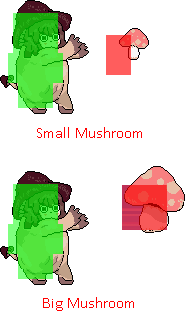 Kinoko is one of the few characters who has natural cancels.
Those characters are: Robo-Azuma, Rogue, and Kinoko of course.

Since cancelling meterlessly is just a rare commodity and a huge advantage in a primarily link-based game.
There's usually tons of caviats to come with it, and of course Kinoko is no exception.
Kinoko after picking a mushroom can cancel ANYTHING (except for super-flash) with 5X/j.X, although you have to sacrafice the mushroom. 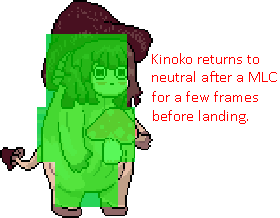 Remember how I said you needed to sacrafice the mushroom for Kinoko's cancels?
You can get around this by doing j.B > j.X. Preserving the mushroom.

This works due to j.X being cancelled by landing, much like every other air button in the game that doesn't have a bounce.
This in tandem with j.B giving extra downward momentum, allows you to cancel j.X with very good timing. Keeping the shroom.
More or less: j.B > Mushroom Cancel > j.X > Ground Cancel

Cuz of this it's called Mushroom Land Cancel (or MLC for short), cuz it's weird.

One of the rare cases of a strictly movement tool in Kyanta.
This move is key to her movement, it's faster than normal jumps or walking.
Not only that, but allows for some links in the air to connect and is key to pestering opponents with j.A.

For future reference, yes all of these work.
Off of every knockdown you can get j.B-OTG twice with proper timing, practice it off of 5[B].
Also, potentially every 5[B] link after U2 or 5EX~EX can FB if 5[B] is released close enough to the ground, it's inconsistent so it's not listed.