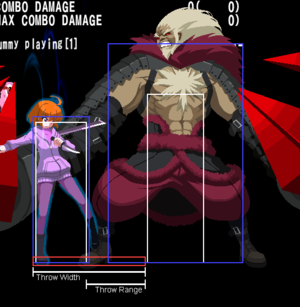 Throws are unblockable attacks that grab the opponent. All characters have a basic throw that is performed with

that only hits opponents that are grounded.

Some characters have unique throw attacks that, some of which deviate from the standard grounded throw:

In the cases where the opponent's loses collision, the throw will still connect.

Grounded throws do not connect while the opponent is in jump startup.

The GRD ("Grind Grid") system is a very unique aspect to Under Night In-Birth, and a very important factor in the game.

The GRD is a tug of war that plays during the rounds of combat. Each character owns six squares on the GRD which they can attempt to fill by being aggressive, recovering/teching, shielding attacks, and using concentration. The GRD is lowered by back dashing, taking damage, using Force Function (

), getting shield blocked, throws getting escaped, and opponents using Concentration.

A timer shows itself as a repeating circle of progress in the middle of the GRD bar. It takes 16.5 in-game seconds to complete so it repeats exactly 6 times in a 99 second round. When the progress bar is filled, the character with the most amount of filled squares will enter a state called GRD Vorpal, which provides a 10% damage boost to the favored character.

When using Chain Shift, the GRD is absorbed and transformed into EXS at a rate of 20 meter per box (up to 120 meter), at the cost of resetting the GRD to zero.

The EXS System is quite simply the super meter, which uniquely is measured in large percentages; starting at 0.00, and going all the way to 200.00. Each character has two stocks (or halves if you will) to their EXS meter; the first stock is filled at 100.00, and the second stock is filled at 200.00

In battle, the EXS meter is filled up accordingly to damage that is taken and dealt, just like any good old fighting game super meter, which is bolstered by being in Vorpal. EXS can also be filled by using Chain Shift, which converts GRD into EXS.

EXS is used for the EX version of Special Moves, Infinite Worths, Guard Thrusts, Assault, and Veil Off.

Most specials have a super version, performed by using the C button rather than A or B. Supers take 100 meter or 1/3 of the bar during Veil Off.

There is a variable amount of recovery after landing from a jump, depending on the action done in the air (or no action at all), whether it was shielded, and whether Assault was used.
Note: There are some moves that are exceptions (mostly dive kicks).