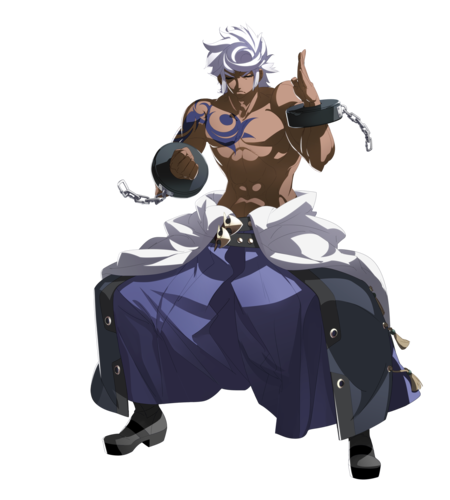 An unnamed fighter of ancient martial arts. So feared was he for his ferocity and strength that soon many erased his very existence from their minds. With no one left to face, he sought to test his mettle against those holding powers beyond mortals, the In-Births. He offers his arm to a Void, but his well-trained muscles prevent the fangs of the Void to penetrate fully, thereby leading to only a vague manifestation of power. Despite this, he continues to seek challengers under the Hollow Night, until one day, a woman appears in front of him and promises him the opponents he seeks. With those words, Enkidu's battle begins.

Enkidu is a decidedly unique mid-ranged footises-oriented character who struggles profoundly with closing in, but can put the rest of the cast to shame with his potential against a cornered opponent. He lacks projectiles, full-screen normals, unreactable mixups, and high-mobility specials, but in exchange, Enkidu has access to Havoc's obscene benefits, some rather crafty hurtbox shifting, and generally remarkably high damage output and meter utility.

Owing to his generally anemic neutral game and unsafe pokes, paired with his high damage output and conversion potential, much of Enkidu’s game plan boils down to one thing- play neutral once. This character is for people that wish to be challenged in the realm of decision making, rather than in terms of their execution or raw game knowledge.