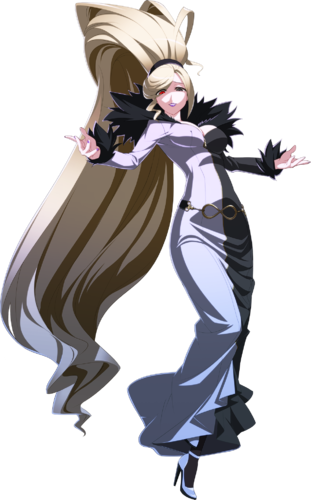 The evil boss responsible for the recent events. She leads a group of talented power-wielders, known as Amnesia, and she herself is infamous, Paradox. However, hearing of a being even stronger than In-Births, the Re-Births, she has sought out and yearned to become one. "Eternity", "Princess of the Night Blade", "Insulator" and the Hollow Night... Immortalize. Confirming all the pieces to the puzzle have gathered, she sets off to ensure her own agenda is seen through. The curtains on her stage rise.

Hilda is a character who has exceptional screen control and a large assortment of projectile attacks designed to keep her opponent at bay and essential zone them out. Her neutral game in comparison to the rest of the cast is quite strong to the point where it feels incredibly oppressive. Hilda's range on many of her normal attacks is extremely big even for a game such as this where characters having near-fullscreen normals is not all that uncommon. Hilda can make good use of her specials such as Fallen Pin and Reverence Pillar to mix up the opponent from very far away or simply control even more space with specials such as Condense Gloom or Skewer. This character requires a relatively good sense of spatial awareness and requires the user to be comfortable with playing very defensively should the opponent get past her barrage of large, long range attacks.