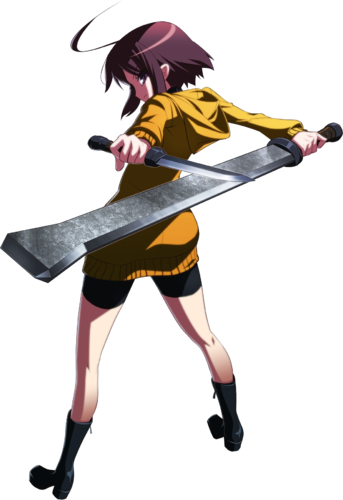 These combos show Linne's basic bnb and are meant to give you an introduction to her routes for most situations. They will help you understand her combo routine and core combo pieces that are actually used in more optimal combos. You will notice that Linne's combo logic follow this simple pattern : Ground combo -> air launcher -> air combo -> ender.

You need more height in order to land the full air string. Delay the C follow-up in 214B~C. Also make sure you input 214A as soon as you hit the ground.

How do I do ...j2B 2C? The opponent always recovers before it hits. (Divekick 2C link)

2C needs to be input right about when you land. If Linne doesn’t even do 2C, then the input was too early. If Linne does 2C but the opponent recovers, then the input was too late. It’s unfortunately a matter of practicing the timing. Do not mash to try to get this link, as it will make landing it even more inconsistent. (Note: If the j2B hits too high or if the combo is extremely prorated, it also possible this link will not work.)

Same principle as the 2C link, but the timing is a little more strict. It’s just getting the timing down. Right after Linne stands up after landing 63214A/B, that’s when 5B needs to be input. (Note: Due to hitstun proration, 63214A 5B can be impossible for combos that don’t start with a good starter.)

How do I use the 214X~B 6CCC corner combo ender? I always drop it. (Wall bounce ender)

First off, this ender uses up a Wall Bounce, so make sure you haven't used both of them yet. Also, in more prorated combos (such as off an A starter), you may not want to use this ender as it will probably drop. Lastly, the second C in 6CC can whiff if the opponent is too high, so try adding a short delay before 214X~B to let the opponent lose some height.

How do I prevent side swap whenever I do jB j6B jC air string? (j2B Side swap/switch)

Practice adding delay in between each button during the air string. The more you delay each button, the less likely you are to Side Swap. The Side Swap is more likely to occur when you are closer to the opponent and have more height over them.

Why do some combos end in 6CC instead of 6CCC? (6CC vs 6CCC enders)

A lot of times, you want to end your Midscreen combos with 6CC, as it gives you better okizeme. Ending with 6CCC Midscreen will not let you meaty pressure if the opponent chooses to back tech on wakeup as there is too much distance to cover.

All combos listed with Ender use 6CC at Anywhere/Midscreen and 6CCC at Corner for a baseline to determine numbers.