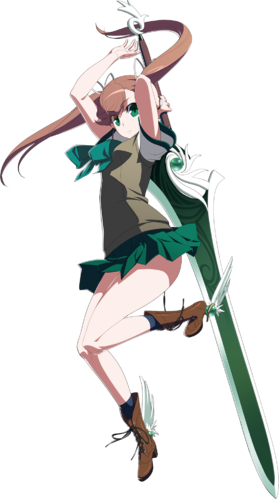 A mysterious girl, chasing after Hyde for reasons unbeknownst. While she cries, "If you're a man, take responsibility!", the exact details of the quarrel is unknown -- that is between the two of them. She wields a long sword with ease, and fights opponents with a style that almost toys with her opponents. Underneath this Night, she finally finds the man she's looking for, the kid with a "Red Sword". Following the rumors, she dives into danger head first, making her way to the Abyss.

Nanase is a well-rounded character with very strong pressure and frametraps, as well as unorthodox mixups. She has great aerial movement control, air normals and jump canceling tools, letting her control the air in a normally very grounded game. With or without resources, she has a variety of tools to maintain the advantage and keep others blocking for a long time, and can punish impatient players who try to poke out of her pressure with well timed delayed specials. She boasts powerful offence with one of the safest and strongest oki tools in the corner. While the range of her normals is average, her specials and EX moves have far greater reach, so she remains a threat even at range. Nanase's kit fits the "main character"-type, but also boasts unique tools that let players get creative with their offence.