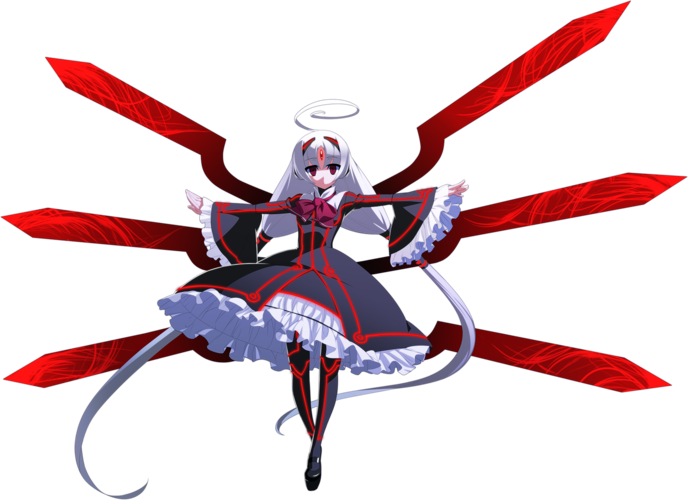 This section includes some basic combos to get you started with Vatista. If you're looking for a comprehensive list of available optimised combos, alongside thorough explanations of their use and how to perform them, check out the UNIclr Vatista Combo Guide 2020+.

Basic bread-and-butter combos to get you started playing Vatista.

Generally, Vatista's combos will utilise an air juggle using gem detonations, so learning the negative edge element of this character is imperative to getting any decent damage.

To simplify most combo routes into a sort of generic flowchart, it generally follows something like:

There are of course exceptions depending on starters, but for the most part Vatista’s combo decision making is fairly easy once you have your routes down.

A good way to practice getting the theory down for Vatista's combos is to try her Mission Mode 4-1 trial. Whilst the initial combo is outdated both damage and ender-wise, the muscle memory you will gain from being able to perform it consistently will transfer to almost all of her other combos.

How do I do charge moves?

It's much easier than it looks - each of Vatista's specials have a charge time. To perform them, hold the first direction for a bit less than a second, and then press the button followed by the input. For example:

How do I get the charge for A Drill in combos?

A common problem a lot of newer players have is not being able or knowing how to do A Drill at the early part of the combo. Since you need the 43 frames of up charge for A Drill, you should hold up as early as possible during 5B, and continue to hold up during jB. If you’re still having trouble, try adding jA before jB to give you extra charge time.

2AA starter may make this a little trickier, but there’s a significant amount of time for you to cancel 2C into Gem set and still pick up with the 2A link afterwards. Try not to delay the cancel into Gem set too long.

The opponent keeps falling out of my combo before my 2BBB connects after B Laser?

If you find your 2BBB is whiffing, you either need to input it faster, or delay the B Laser a tiny bit after the 2C to get a more consistent height. See if you can figure out which it is, and adjust accordingly.

How do I get 66C to connect after B Drill?

It's quite a tricky link, but Under Night has a very lenient buffer system. Start buffering 66C towards the end of Vatista's B Drill animation as she finishes her pirouette and you should be golden.

A couple of other routes that could be found useful from an A starter.