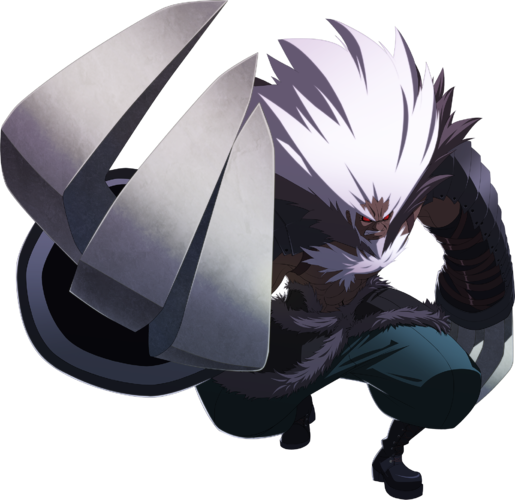 A mysterious old beast, who has lived centuries. With ties to the "Night Blade", he operates by the Princess's side. Speaking of the princess, she has recently taken a somewhat useless high school student under her wing, leaving the beast perplexed. All the while, Wald and his comrades are under attack from a mysterious organization, Amnesia. "The Hollow Night is upon us, and we will settle this", says a high ranking member of said organization. In hopes that he may protect his master, Wald decides to head into the belly of the lion's den, alone. Fulfilling his promise to Linne's brother, Kuon.

Waldstein is the big body grappler of the game, i.e. slow, big buttons, and focused on the use of his 360X command throw to deal damage. The lack of speed in his movement and attacks is mitigated by UNI's universal Assault mechanic; combined with having one of the strongest jumping attacks in the game in j.C, Waldstein has a uniquely strong (if predictable) way of closing the gap and playing at his best ranges compared to grapplers in other fighting games.

Waldstein excels in both close-range and mid-range scenarios due to having several ways of creating frame advantage (1A, 4B, 214X), normal attacks with great range and dominant hitboxes (5B, 2B, 5C), and the fastest command throw in the game (360A). Because his attacks generally have slow startup, Waldstein prefers to preemptively strike fast and establish his highly oppressive pressure game whenever he gets close enough, but as of UNICLR he has a complete set of tools with which to establish threat at almost any range. All of this culminates into Waldstein having optimal combos that are both very easy to learn and highly rewarding.

Waldstein does a standing horizontal swipe with his claws. 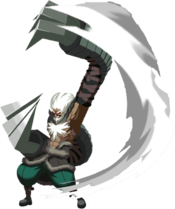 Waldstein slashes with his claw upward at full length.

A charged/Increase version of 5C. 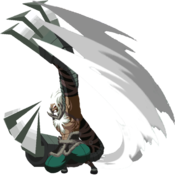 Waldstein punches downward with the claw opposite his j.A. 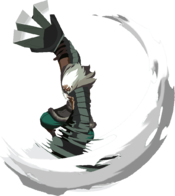 Waldstein turns sideways and performs a huge downward slash with his claw.