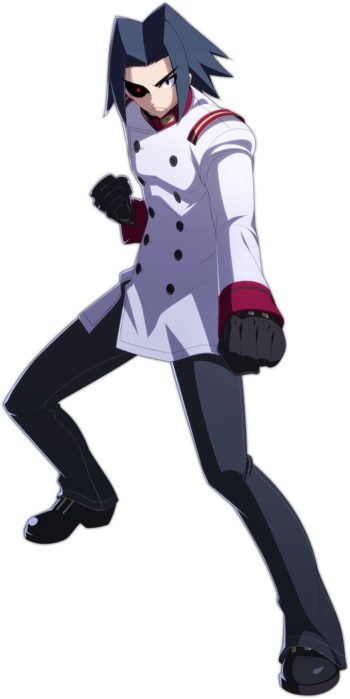 A man of mystery who suddenly appeared in this world. His body is endowed with a vital secret, he acts in with utmost secrecy.
After awakening from his long slumber, he returned to his homeland to discover the scenery had become all too unfamiliar. Despite not knowing left from right in this land, he fully intends to accomplish the mission that he was entrusted with.
He possesses a body forged from constant training and martial arts and has the ability to discharge electricity through his "Blitzanzug". Possessing a projectile, anti-air, and rushing attacks all together, it's as if he's the main character. Just who is this man...

In UNIEL, Akatsuki suffers heavily from his lack of range in a cast dominated by characters who have excellent control of space. However, he makes up for it by being stronger than most in the close-range game. He is a character that requires heavy patience in order to get his gameplan running, but is well equipped to rush down and punish other characters for attempting to escape his grasp.

Temporary note: "X" is a placeholder for any info that is currently unavailable. Once that info is known it will be filled out.

Because mix-up and mid-range neutral game are not his strong points, Akatsuki has to work his way in, and make every hit he lands hurt. Luckily, he boasts some of the highest damage in the game without the use of resources (and with resources stands next to the top characters in terms of damage output)

Akatsuki combo theory differs between midscreen and corner routes, but in general against standing/crouching opponents, your goal is to always hitconfirm into his 6C. On ground hit, it gives a high launch, that from there allows you to confirm into a variety of different routes, using the strong untech time on his normals to achieve either knockdown (214B/9j.C), or trade the knockdown for higher damage (22B).

The easiest way is using his 2C to float them low to the ground, and then go for 6C into one of his enders, but you can achieve similar results using any of his other normals in the same way. These routes are simple and difficult to drop, making them a nice consistent way to damage your opponent. But if you want to make the most of your hits, you will always want to go for his 6C loop. The idea is simple: upon air hit, 6C puts the opponent in a special air-juggle state that does not send them forward as much as other air hits. After the launcher, you use a well timed 6C to juggle, and cancel into his fireball. When done correctly, the fireball hits them in such a way where you recover before the untech time is over, and are able to hit them again with 6C, juggling them higher than before. Off any normal starter, you must cancel into your ender here. Off a raw 6C starter, however you are able to repeat this again, and after the 2nd rep, you use the last 6C to cancel into your ender. This route works off any starter, including assaults, but carries character specific timings (does not work on Eltnum except for 6C starter), making it a far more difficult route that requires a lot of practice.

When you use a starter that knocks the opponent down (6B, j.2C, and air throw all give this affect), you can OTG with most of his normals into a quick air combo/juggle into his enders. However, like the standing routes, you can also perform the 6C loop for more damage. You simply OTG the opponent with c.C or 5B (necessary off spaced 6B hits), and delay cancel into air hit 6C. Off all three of these starters, you are able to achieve the two repetitions into his enders, and the timing is more universal across the cast.

In the corner, Akatsuki loses his loop, but gains tools that more than make up for it. He possesses two normals which cause wall bounce, his 8j.C and his dash C, which are essential in providing extra juggle time with his normal. He is also able to combo into his j.2C more freely, using both wallbounce as well as the constant close proximity of hitboxes (midscreen combos into j.2C are possible, but require chain shift or character specifics to achieve, see combo listings for details).

For standing confirms, you still want to go into his 6C launcher, and juggle afterwards with either wallbounce or his c.C, before comboing into j.2C to bring them back down to the ground. From there, you OTG confirm into 6C, and perform his enders (preference goes to 214B to keep them in the corner). Off OTG starters, the idea is the same, sans the 6C launcher. You simply juggle the opponent using normals and wallbounce (but be careful, as the initial knockdown counts towards the 3 bounce rule), before comboing into j.2C into OTG ender. Though it may seem overly simple, that is because his combos become much easier in the corner. The reward also increases greatly, and with the exception of 6B and air throw starters, you will always hit above 3k damage. The corner is where Akatsuki's strengths truly shine.

For 6C starters in the corner, the idea is still the same; use normals and wallbounce to juggle for damage, before ending with j.2C > OTG ender string. However, his 6C is noteworthy as it gives him far greater combo time than any of his other normals or specials. This allows him to be more creative with his juggles, comboing normals into themselves and using fireball and his tatsu special as well. Thanks to the damage boost he receives for this increased untechable time, Akatsuki stands as the character with the highest damage potential without the use of resources, with a 4000 damage combo that needs no vorpal damage bonus, chain shift cancelling, or super meter.

USING METER TO END COMBOS: It is important to note that Akatsuki's supers carry little practical utility in extending combos, and are best only used to give extra damage at the end. Also important to note is that, outside of IW (which transports him midscreen regardless of position anyway), none of his supers grant him knockdown, and even IW loses it off of long combo routes. Therefore, they are best used only for the kill or when they will grant you a significant life lead. Adding them is easy: Simply cancel the last 6C of your combo into either 22C or IW. Off 214B midscreen, you can also use j.236C, though this does not work in the corner in many cases due to the 3 bounce rule (214B knocks down), and in cases where it will, it is often better to just cancel the landing recovery frames into 22C, which does more damage.