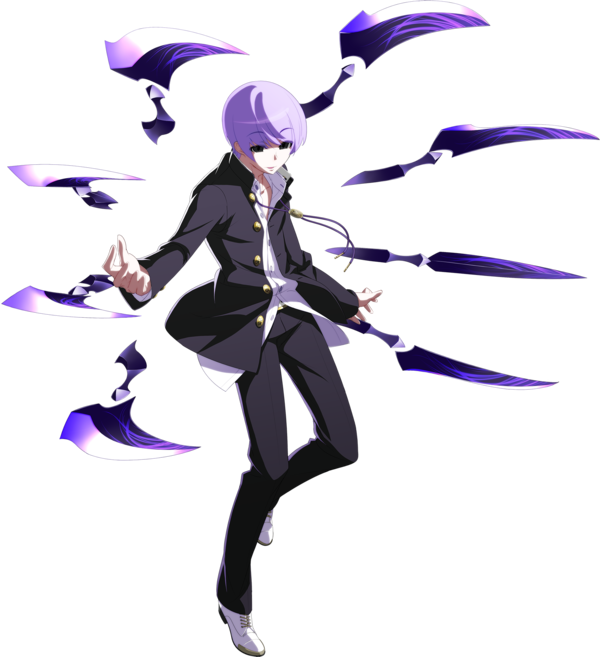 Certain of Byakuya's moves set webs onscreen, similar to Testament's traps. Webs will steal one block of GRD from the opponent if they hit, or half a block if they are destroyed by an attack. Additionally, webs will snare opponents on hit for a relatively long time, allowing for easy followup combos.
Health: 9500

Byakuya is primarily a "setplay"-type character with strong offense but weak defense. While the wide range of his normals are excellent for neutral and pressure, his complete lack of invulnerability on any of his non-system reversals means that it is very difficult for Byakuya to escape pressure once he is pushed on the defense.

Byakuya's neutral game is strongest at midrange, where he can make good use of his relatively fast, extremely long-ranged normals to keep opponents out of their comfortable ranges, which will generally be shorter than Byakuya's. His 2B and 2C have extremely long range and fast startup and hit low, forcing opponents to commit to low blocking once Byakuya is in range. Versus airborne opponents, 5B has a very tall vertical hitbox and can be used to cover multiple angles of approach with relatively low commitment. 66B/C and 236B are slightly higher-commitment pokes, but have extremely long range and are easily capable of catching opponents who are not expecting to have to block from so far away.

Byakuya suffers more at close range, where his lack of a safe 5f poke (his 2A is 6f and -3, compared to many characters who have 5f jabs that are only -1 or -2 at worst) hinders his ability to stagger pressure with jabs. Similarly, Byakuya has difficult matchups against characters who are able to stuff his approaches from further away than his optimal midrange pokes, such as Gordeau, Vatista, Hilda, Yuzuriha, etc. Due to his lack of a real projectile and otherwise slow dash speed, he has a hard time avoiding projectiles, and being forced to block them will significantly hinder or entirely negate his attempts to close space. His 214X~X moves allow him to move past some moves, but they are extremely high commitment mobility tools that can be stuffed on reaction, so his best bet is typically to stagger dash in a little bit at a time and block often.

On pressure, Byakuya actually has no safe normals (the safest being blocked 2A or 2A whiff cancel off a blocked 5C move, both of which are still -3) but he is able to make up for this with the fact that his normals can all be canceled extremely late, meaning that it will be very difficult for the opponent to tell when his moves are actually unsafe and when he is just delaying them for a frametrap. As such, Byakuya can easily train opponents to respect his pressure, allowing him to safely set up 214X webs for mixup and pressure (which can otherwise be disrespected by mashing) or simply do things that would otherwise be hugely unsafe (such as 5C dash up throw). Because his normals are all unsafe, it is easy for opponents to mash reversals through them; however, Byakuya's huge range often pushes him far back enough that most reversals whiff, meaning the Byakuya player needs to have a good sense of the opponent's reversal options and adjust his pressure accordingly. Once Byakuya confirms a hit, his combos almost always deal high damage, build lots of meter and GRD, have good carry and enable side switching if necessary, so he keeps momentum extremely well. Again, some characters deal with web oki setups more effectively than others, so a sense of the matchup is necessary to do well.

On defense, Byakuya lacks any sort of invulnerability or reversal (other than VO/IWEXS), so he has a hard time escaping very tight strings with small gaps. However, thanks to the huge range and relatively fast startup on his B moves, he is often able to wait out pressure until the opponent pushes himself too far out, and poke out of pressure when the opponent is at frame disadvantage and cannot reach him with any move that would normally be fast enough to beat a B poke. As such, green shield's pushback and blockstun reduction are extremely useful for Byakuya, especially since he builds meter and GRD very quickly and thus typically has a lot of meter to spare.