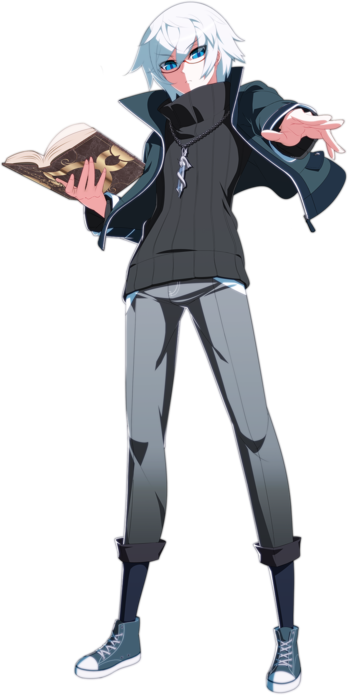 "He plots. Staring at the truth with his clear eyes over the glasses. The beast within him, Chaos Code. Hiding and waiting for the chance to release the chain. His dearest friend's wish. His delightful colleague had a conflicting ambition. Which to choose is too obvious. The obedient beast bares the fangs. They will equally bite off everyone who stands in his way."

According to Gordeau, Chaos was once a violent youngster, earning him the name "Bloody Chaos" at some point. Gordeau told to Hilda that he has never beaten Chaos in a fight, but Chaos says that's a lie - meaning Chaos has at least once fought and lost to Gordeau. Chaos changed his style and started to fight using intelligence instead of brute force.

Even after Gordeau left Amnesia, Chaos and he have been in contact and working together to track down the Licht Kreis and find the Red Knight. Chaos personally is aiming to beat the Aion and the Licht Kreis with the allies he has

Chaos's special ability is to control the Lizard Beast Azhi-Dahaka using the book "The Codex of Disorder: Chaos Code". Chaos has no special moves of his own, and all of his special inputs are used to control Azhi. Chaos's ability allows him to passing link off of Azhi Dahaka's moves back to his own. This allows you to chain long sequence of strikes between Azhi and Chaos. It should be noted that you can only use each Azhi special once while Azhi is active until both Azhi and Chaos return to neutral.

Chaos has a special guage under his health bar that indicates the status of Azhi-Dahaka.

Green: Indicates that Azhi is available for use. If Azhi is on screen while the guage is green, he does not have an active hurtbox on screen. After being active, returning to green also restores Azhi's used special moves.

Red: Indicates that Azhi is currently active performing or recovering from a move. During the duration in which the gauge is red, Azhi has a hurtbox and can be killed by any non-A attacks with an active hitbox (this includes special moves and even command grabs).

Grey: Indicates that Azhi has been killed and cannot be called again until the gauge returns to green.

Approaching via the Ground

Approaching via the Air

If given the chance, Chaos can mount some very strong pressure using his ability to chain his normals and Azhi attacks in tandem to create long and varied blockstrings. However his actual mixups are rather poor since he lacks a standing overhead and his jump ins are very reactable. Despite this, he can still setup some cross up setups using 22X and go for easy double overheads with j.2C > j.A. His normal throw is also a bit scarier than normal as it can lead to a combo if azhi is set up with 22x. Even if azhi isn't set chaos can still pick up for a combo if the opponent doesn't tech right away, letting him punish opponents for late teching.

Unfortunately, Chaos' defensive options are rather poor. Lacking invincible moves (aside from IW or IWEXS) he must rely on system mechanics in order to get his opponent's off of him. Use shielding to gain advantage over your opponent and Veil-Off when you spot a gap in your opponent's offense.

Chaos' combos follow a pretty straightforward theory that you can adapt and modify depending on what you want.

Here, after you've launched them with 5CC or 5BB you juggle them in the air towards into a knockdown

For certain reasons, you might/want to end the combo after the j.2C. There's two main reasons.

Part 3: Off the Ground

If you decided to not go for the close j.214B oki, then at this point you will need to pick them up.

That's it. Very simple. You can do stuff like Dash C>2C and 2C>6C, but it makes the combos unstable and sometimes even optimal. Don't bother. If you need to finish with IW, then you can do;

Now that you've OTG'd them with 2C, you want to finish them with Lizard.

This all applies to the corner as well. More options are available there however that will be listed later. Please visit the Dustloop Thread on Chaos for more combos at the moment.