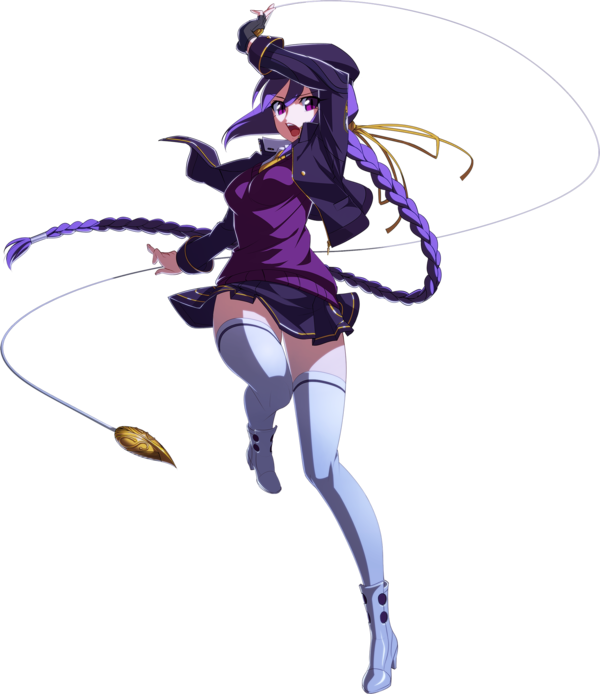 Cool ground-based versatile character that's both A tier and S tier at the same time.

Eltnum has two unique traits. The first is whiff cancellable lights in vorpal. The second is her Bullet gauge.
If you look under Eltnums health you'll see a unique meter that displays twelve bullets and a horizontal meter underneath that with a white section. She can have up to 12 bullets at a time, that are consumed by 236x and 22A/B. Once you are out of bullets you need to manually reload with 22C before you can shoot any more, this is where that second bar with the white zone comes into play, after you initiate the reload you must hit a button to confirm the reload. If you confirm while it's in the white area you will be rewarded with a special reload (indicated by shiny/pulsing bullets) instead of regular ones.
Health: 9,400

Overview Eltnum can play at all ranges, both offensively and defensively, with the best option varying depending on the matchup. This only stays true as long as things stay grounded, as she has mediocre air options and a weak anti-air game. Despite having a lot of options, they are all situational and inconsistent, so she relies a lot on anti-air shields and suffers against multi-hits aerials and air specials that ignore it. She can also be meter hungry for confirms and her amazing 421C so managing GRD and screen control is important to keep her fed.

Eltnum will rarely get in on her opponent directly, she'll either wait for them to come to her or use a knockdown earned from mid to long range. She has forward momemntum and extremely long cancel windows on most of her normals giving her amazing stagger pressure, but using 5A, 2A and throw will often be good enough especially in matchups where the frame disadvantage on her moves is an issue. 22A and 236A can work as anything, from frametrap to safe/plus (why) true blockstring pressure enders.

While mediocre for offense her movement options work for defense. Strong neutral jump at mid range, great backdash that puts her in the air making it harder to punish and a fast run to crossunder and cut the distance when interrupting. When pressured 5A, 2B and 623B are strong meterless post-shield options. With meter 421C works for everything and flips the risk-reward of defense in her favor.