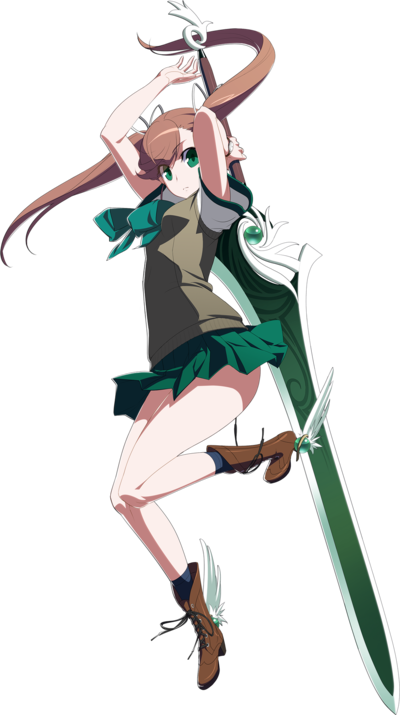 A middle schooler who relentlessly pursues Hyde. Two weeks prior to the Hollow Night, Nanase was bitten by a Void and rescued by Hyde. This event awakens her as an In-Birth. She mistakenly assumes this is Hyde's doing and blames him for her transformation. She chases him into the Hollow Night, insisting that he take responsibility for his actions.

Nanase's unique trait is the ability to jump cancel any normal or dash attack on block or hit with her Force Function, and to float in the air and control her air movement with it. Any blocked air normal can be canceled into float for additional air options.

Nanase is a rushdown oriented character with unusual mixups, very strong pressure and frametraps, and a variety of tricky crossups. With the ability to regain frame advantage at any time during a blockstring with her projectiles, Nanase can keep others blocking for a long time, and can punish impatient players who try to poke out of her mixups with well timed delayed specials. While she boasts powerful offence with one of the safest and strongest oki games in the corner, her neutral game is lackluster. Often outranged and unable to set up projectile cover, Nanase requires a good understanding of her opponent's character, and must be patient in her approach. She also is very dependent on meter, and gains a lot from Vorpal, making GRD a valuable resource. With a lot of tools that requires careful and clever usage, Nanase is a deceptively hard to play character.

Nanase's strategy will vary wildly depending on the matchup and whether or not she has meter and/or Vorpal on hand. Her general gameplan is to use projectiles to cover her approach and get in, while reacting to the predictable responses to her bullets. Once she is in, Nanase wants to remain on offence for as long as possible. This means a lot of low-risk mixups, regaining frame advantage through the use of her projectiles, and a priority on proper oki and rushdown without ever giving her opponent any room to breathe. Without resources, she is limited in what she can do, but can take bigger risks at greater rewards when meter is on hand. Vorpal is crucial to Nanase, as it allows her to run a number of mixups, frame traps and crossups she normally wouldn't be able to do, or wouldn't get much out of. However, in matchups where using her projectiles in neutral is harder or impossible, she will struggle to mount an offensive, and will have to rely solely on her basic tools to close the gap. She has a pretty good dash and reasonable range, as well as a long range dash attack special that keeps opponents on their toes, but otherwise isn't stellar by herself. She requires a good deal of patience and work to get in, but works well once she gets there.

Nanase's offence varies depending on her available resources and her opponent's options. The basis of her pressure is the use of Float (FF) and jump attacks to regain frame advantage while doing stagger pressure and mixups, tempting your opponent to hit buttons to stop you from doing that, and punishing them for it. If you use FF into a TK j.236A, this will put you at a good advantage if it is blocked. You can then go either into a 66B/C mixup, an assault, a grab, or just dash in and resume pressure.

Staggers: Nanase has fairly generous cancel windows on her normals. Staggering her normals is a good way to scare your opponent into doing anything during pressure. This is important as you do not want to deal with someone who's ready to hit you out of FF. In addition to her normals, Nanase can delay cancels on her dash attacks, which are already barely minus (if well spaced for 66B's case). If you cancel into 214A/B you can again delay or even omit the followup dive. All this put together leads to a guessing game for your opponent over whether or not you're going to follow through and risk hitting you out of staggers, or simply block and deal with the next mixup.

Force Function: This is an important tool for Nanase's offence. Being able to cancel any normal into a jump gives you several options during pressure.

Crossups: Nanase has several options to do crossups and fake crossups. Most of them do not work well without meter or CS to capitalize off of hits or make them safe on block. If you don't have any resources at hand, it might be better to simply avoid these until you do.

j.B > j.236B : Fake crossup. Very tricky due to the momentum stop of j.236B; it will stop you in the air and throw a bullet down, while your opponent is pushed back in front of you due to pushback from blocking j.B. It looks like a crossup is coming, but if they shift their block, they will get hit by the wind for a full combo. If they block, you are still at an advantage.

66B/C: Nanase's dash attacks have identical startup animations, but while B is a low and slightly faster to come out, C is an overhead.

236A~6B: Be wary of using this without meter or Vorpal to make it safe. Make sure the initial 236A whiffs and cancel it as fast as possible, as it's much easier to react to if they block the first hit. It's not an amazing overhead, but its presence is enough to keep opponents on their toes. With Vorpal however, it becomes a much better tool; you can CS the overhead in the air to confirm a hit, and if it was blocked, you can instead Float for more overhead mixups, or land and go for something else. Something to throw out once in a while to keep your opponent awake, but do not rely on it too much. It is very easy to get predictable with this move.

214C: This is what you want to throw out any time you use a move that is unsafe on block or uncomboable on hit. In the corner, it is much better as you can combo out of it with ease, and since it puts you right next to them, the +3 advantage lets you continue your pressure on block rather than just be safe at a distance.

GRD break: Fighting a GRD broken opponent is a huge boon for Nanase. Since shield is no longer a threat, she can run her crossups, overheads and air assault mixups with total abandon. For example, against a cornered opponent, you could do TK j.6D > j.[C] > j.B > j.2C > FF > j.[C] > j.B > j.2C, etc. If you successfully bait a shield or land a Veil Off, make the best of this opportunity.

With relatively average length normals, you will need to employ a good deal of patience on defence. Blocking for extended periods of time is not a problem, since you need the GRD anyways, and your opponent likely won't be too reckless in his offence since you have a DP. Your only quick pokes are pretty short range, so sometimes you'll have to keep blocking even when at a slight advantage.

623B: Nanase's DP has terrible horizontal range, making it easy to space out. It is still a DP though, and anyone who extends a hurtbox or jumps at you can be made to think twice about it. While it doesn't have very good range on the ground, it does reach pretty high vertically and hits around her, so anyone jumping at you or over you, with an air assault for example, is vulnerable to it. If you have Vorpal, you can get tremendous damage off your DP with CS, making it a nonetheless pretty good threat despite its shortcomings.

3C: The hitbox on this move is terrible, but it has head invulnerability a few frames in, so you can use it do deal with obvious assaults or the throw OS. For regular anti-air though, stick to your DP. It's not as good as it looks, and it doesn't look that great to begin with.

214C: This move is amazing at stopping air approaches. It is quick on startup and has a gigantic hitbox reaching all the way to the top of the screen. Some characters like Byakuya and Waldstein have a tendency to air assault to move in, protected by their big jump attack hitboxes, but this move will put a stop to that. Note that Nanase flies forward in the air alongside this move, and it is not invulnerable, so it can't be used to beat air projectiles like Linne's Kuuga or Merkava fireballs. Still, it is a strong option, and while it is air blockable, it is also advantageous on block, so if the positioning is right, you can anti-air them on landing with 5A or 3C while they are still stuck in the air blocking.

41236D: Nanase's IW is an expensive and risky option on defense, but it is by itself a strong reversal. It is fully invincible until well into the active frames, hits at a great anti-air angle, leads into huge damage and is air unblockable up close. The extended projectile portion is air blockable, but the huge range still gives it good utility for catching people in the air. Don't throw this out on a guess though; the loss of meter hurts just as much as the punish you will eat if it's blocked.

Force Function: It should be noted that Nanase can air block after using Float, and you can use Float from an assault, making it possible to block after a grounded or air assault while stopping and controlling your movement. Not terribly important, but it can be used to avoid some moves like IWEXS, or if you just want to go back on a badly timed approach.

Note on enders: All combos that end in 2C > 214AA can instead be ended with 5C > 214AA, with a small delay between 214A and A. This will sideswap Nanase which can be useful if you want to be on the other side, but also lets you add 623C for a damaging ender, even if you're out of groundslams (the opponent never touches the ground). be sure to input the 623C the correct way; you will be on the other side after the dive.

The combos below are noteworthy corner-only variants.