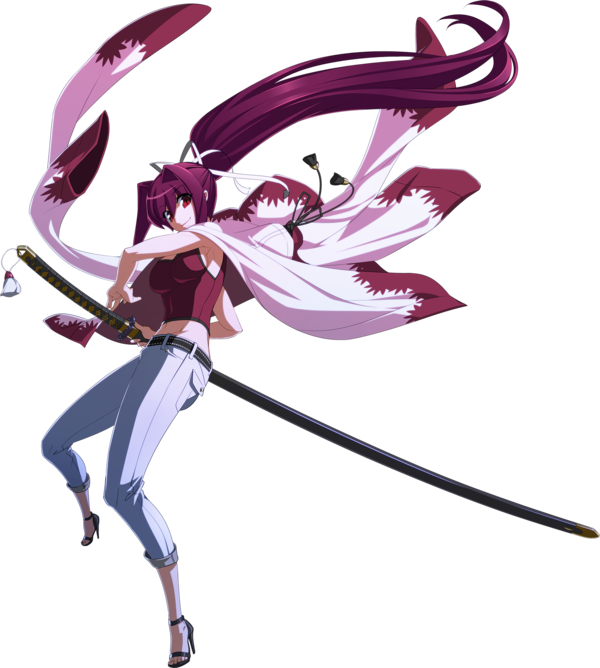 Yuzuriha has a stance system that relies on her holding down buttons while inputting or after inputting commands for specific moves. These moves are marked in the movelist below with ★'s next to their name.

You enter stances by default when you use these moves, and you can stay in the stance by holding down any button when performing the move.

The buttons that Yuzuriha has available for use while she is in her stance are displayed as three icons, or stance marks, right under her lifebar. They will appear when she is using a move that enters a stance, and they follow these color rules:

More information on the actions Yuzuriha can perform in her stance are available in the Special Moves section in the movelist below.
Health: 9,800

Yuzuriha's comfortable somewhere between close and mid-range; most of her combo potential is in close quarters, but leaving space between her and the opponent lets her use her tools a little better. She doesn't excel at rushdown per se, but space control and mind games; good Yuzurihas will display flexible use of her normals and specials to punish the opponent's poor decision making and capitalize on that. Her teleports are useful for confusing the opponent after using her stance-related normals and specials, while the specials themselves are excellent for helping her buy time to position herself--or positioning herself better when they hit.

Yuzuriha's weaknesses, though, are serious. While she does control space well, her attacks have noticeable recovery time, so misreading the opponent's action or position can be a ticket for her to get punished. When she's put on the defensive, her answers are mostly blocking well, attempting to use her 4B, or using a Vorpal-state Guard Thrust to push the opponent away, as her sole reversal-worthy move will eat up all of her meter. These two factors mean that she will have to pick her counterattacks very carefully against opponents that can overwhelm her with superior attack or movement speed, or opponents that can punish her own mistakes from a distance.

Some of Yuzuriha's more challenging combos will utilize her 7/8/9 jump from her stances, with the use of the D button to cancel the stance so she can use her air normals after the peak of the jump. Rather than press the direction, then press D at the peak of her jump, it is often easier to combine the two motions or pre-buffer them. There are a few ways to do this:

If you do this successfully, the circle that indicates the end of the stance should appear where Yuzuriha jumps from, or during the middle of her jump, and not at the end of her jump when she's hovering in the air. Even with the cancel, the timing for the normals is still a little tricky, so don't mash it out. Practice something as simple as 236A~8D (insert normal here) if you need to improve your timing.

Normally, when Yuzuriha uses a move that leads into stance, she can't use the same button twice in a row. However, there is a trick to reuse the same button while in the stance, thanks to the fact that using a move to enter a stance doesn't automatically consume the mark. The process is pretty straightforward, and can be done multiple ways:

In combo notation, variant 1 is commonly referred to as a slide, while variant 2 is commonly called a hold. Done properly, the pink stance mark should shift to the button that you're holding down, instead of the one that was used to start the initial move. This gives you the freedom to use the attack from the first button once again.

Naturally, using any attack after shifting the pink mark to a different button will consume that particular mark, so it's only really useful one time in any given combo.

You can use up all stance marks while in the stance if you so choose, but this will mean that unless you restore them, Yuzuriha will not be able to attack, or do a slide or a hold to a different stance button.