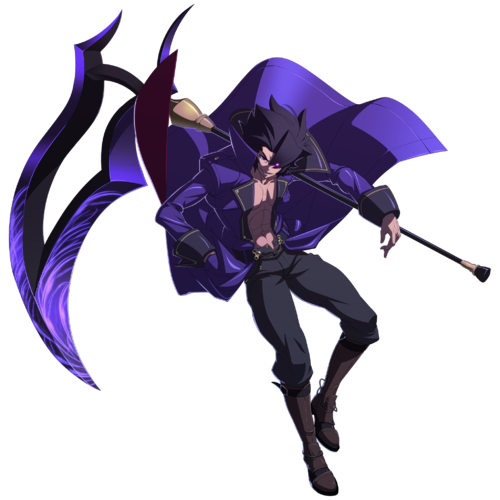 A fighter who is infamous in the underworld, as the "Invincible Mercenary". As his title suggests, he always fights on someone's behalf as an agent, nonetheless his true intentions are unknown. The air is tense, with the next Hollow Night looming... rumors of a Re-Birth, super powered In-Births circulate. Amidst this chaos, he discovers an old friend, Hilda's -- and Amnesia's -- plans, and sets off to put an end to it. Not for hire, but for his own satisfaction. Thus, he heads to the Abyss, sickle in hand.

Gordeau boasts some of the best footsies tool among the cast, with a mixture of kicks and punches that make him stressful to deal with up close, along with his scythe to poke out opponents at range. Along with some great mix-up potential, including several standing overheads and command grabs, and three great reversals, he's quite threatening when he gets within his effective range. In addition, most of his standard combos will end with Assimilation, which steals one block of GRD from his opponent, which gives him an easy way to maintain a lead.

That said, he can have problems approaching the opponent from afar, as he has no projectile or other gimmick to help him, meaning he has to use standard methods of approach like dash-blocking to close distance and get his game-plan started. But that isn't the worst problem to have. Enjoy your high-tier.