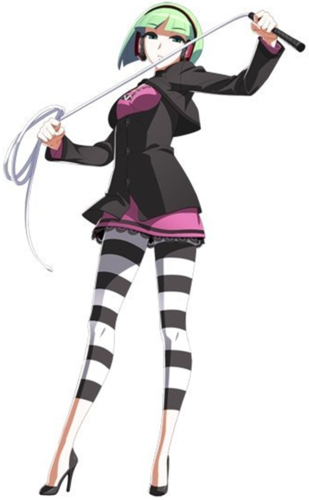 Having a strong sense of power, Phonon leaves the EFG, a student self-defense force known for their strict rules, so she can use her powers more freely. Her behaviour is not unlike a normal student's, going through a sensitive stage and wanting to find their "true self" amid the exhaustion of daily life. She believes her In-Birth powers are proof of awakening to her true self. As such, she uses her power against other under the darkness of night. Little does she know that there is someone else who also moves shadows who knows her "false self" from before she awoke.

Phonon boasts some great ranged normals that insure her dominance over her part of the screen, as her strings can vacuum the opponent up and corner carry them. Once there, the opponent can have a hard time poking out or fending off her assault. On the downside, her defense is a bit lacking, and she has a somewhat iffy air-to-ground/ground-to-air game.