One of the most common questions and issues that comes up for new players without access to a console is, "How do I set up a training mode?", which we'll go over here. In addition, we'll do a run down on every other console training mode option available for Vampire Savior so you can pick the one that right for your needs.

Your choices are between different versions of MAME and FBA (Final Burn Alpha). At the moment only the MAME-RR solution is up, as MAME-RR has the most utility. In the future I'll update this page with other options.

This training mode contains all of the functionalities of previous training mode features which were developed by Jed Possum, Dammit and others) and unifies them into one script. It also has many additional features which are described here N-Bee's Updated Training Mode's Repository. You may find the current release on this page. I have described the major bugs or incomplete features that I am aware of in the readme. Please post bugs here (does not require an account). If you wish to get support for the training mode, please visit the Vampire Savior international discord's #resources or #development channel (and optionally ping N-Bee).

MAME-RR is a powerful version of MAME that has extra debugging tools and allows for scripts (LUAs) to be ran. Though, we'll be using its abilities to create a Vampire Savior training mode on the PC.

It isn't perfect though, as you can only run one LUA at a time, but utilizing the cheats in tandem lets you still accomplish many things.

Below is a compiled .zip with Vampire Savior and MAME pre-configured with the correct settings and all the scripts in the right location. Just download it and you're good to go! 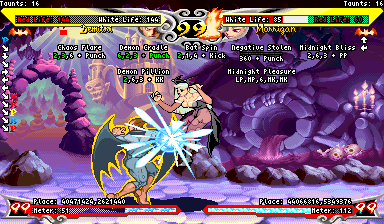 Created by Jed Possum, this is an extremely handy script with a lot of functions. This is the best way to practice Vampire Savior on emulators at the moment! It's still in development, with integration of a Hitbox viewer along with some other features in the next version. It may be a while before the next release, so get what use you can from it right now!

Its very feature rich at the moment, with things you would not find in a console training mode, so be sure to read the below carefully! 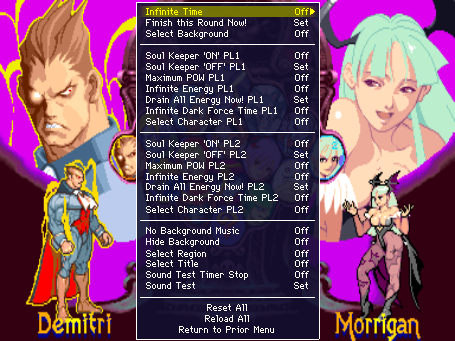 This is the old method that was typically used for a Vampire Savior training mode on the PC. Just turn on a few cheats and have at it. With the Vampire Savior Training Mode LUA this has become a bit redundant, but is still has a few uses by covering what the Training Mode LUA is missing, like infinite Dark-Force time. It is especially useful when using the Hitbox Viewer LUA as you can only run one LUA at a time. You'll still have access to Infinite Time, Health, and Meter.

One of most important training mode features missing when doing PC Emulation is the ability to make the opponent roll. If you're using an 8-button stick or controller, you can set one of the extra two buttons to [P2: Left + LP] and the second free button to [P2: Right + LP], then just mash one of them on knockdown to force the roll.

To force the opponent to jump, I usually bind the Player 2 directionals to the arrow keys, and then jam a penny in hold down the jump button. That's not going to work on all keyboards though. 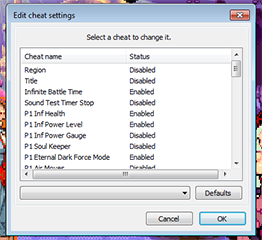 Generally a quick and easy training mode to set up, but doesn't provide anything beyond standard emulator cheats like Infinite Time, Health and Meter. This will work with either the version of FBA that came with GGPO, or the most up to date version of FBA which is linked below. The older version of FBA has you place the cheat file in a different location than the newest version, so be sure to read the "Installation & Setup" process listed at the bottom of this section.

This cheat file has been pre-configured, so as soon as you place it in the correct folder and load up the game the following cheats will be turned on: Infinite Time, Infinite Health P1 & P2, Infinite Meter P1 & P2 and Infinite Dark-Force Timer P1 & P2. If you want to turn them off, load up the game and select "Misc > Enable Cheats" and turn off the ones you don't need. You can also directly edit this .ini cheat file yourself as needed.

Download the most up to date version of Final Burn Alpha 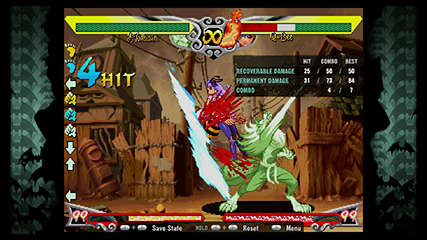 The most accessible console training mode today, and one of the only good ones (along with Vampire, Darkstalkers Collection).

It's a feature heavy training mode with a lot of good sides. For one, changing training settings is a bit more snappy than the other versions, as you don't have to restart the round every time you change a setting. There is a decent Record/Replay function. It allows for in-match save states, so you can reload any specific point you want. There is an extremely detailed command list. You can also hold "Select" to control both Player 1 and Player 2 at the same time.

As far as downsides go, is the Attack Data display is bugged, and does not properly show damage. If you need to check damage values, use Vampire Darkstalkers Collection. Also, depending on who you ask, the release has a slight bit of input lag, but most players would not notice it unless they are playing "link combo" heavy characters. Playing on a CRT may mitigate that problem though. It's also missing the valuable "random roll direction" on wakeup that was featured in Vampire Darkstalkers Collection.

How the SAVE STATE function works:

Consider using up all of your "taunts" (There are 16 available for both characters per match) before using the Save State function as they tend to get in the way, and each time you load up a state you'll end up seeing the later half of a taunt. Also keep in mind that the Save State feels like it takes a couple frames to be created (at least to me) after pressing Start and Select.

How the RECORD/REPLAY function works:

It's a little troublesome to go back and select replay over and over, but the menus are quick. Keep in mind that since the replay is a savestate, it also records your original position, so you don't need to re-orient the dummy if they end up out of place... But this also comes with the problem that if you cross the opponent up, their directional inputs will be going the wrong direction. It's a bit different from most Record/Replay functions, and the lack of an auto-replay is annoying, but it does it does its job. 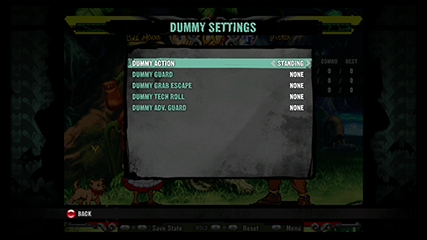 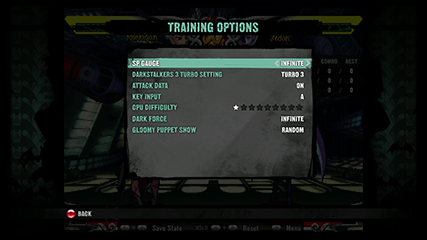 How the ATTACK DATA Display is Bugged 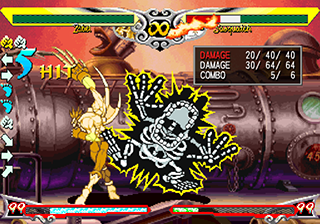 A reliable and great version of the game for training mode. It is extremely feature heavy, having pretty much everything you could want besides a Record/Playback function.

In terms of comparison to Darkstalkers Resurrection training mode, this is what Collection has to offer over it:

The are several problems though. The game emulates extremely poorly, so you'll need a PS2 and a way of playing Japanese games. Also, the match must restart every time you change settings. A nice tip though is if you hold "Select" you can control both characters at the same time. 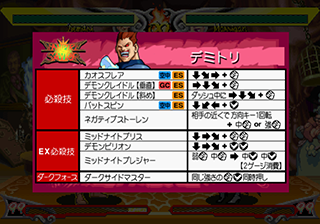 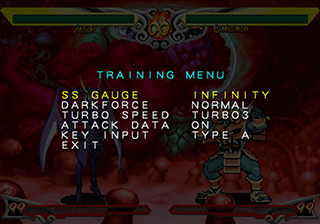 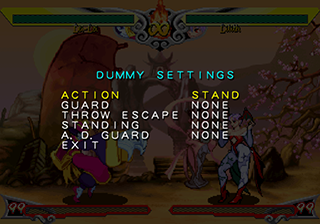 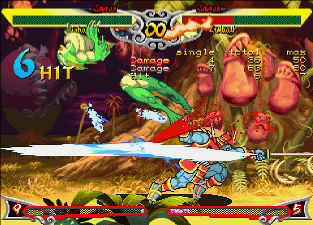 WARNING: This game is based off of Vampire Savior 2, and even if you select "SAVIOR" mode for characters many things such as dash links, hops, air dashes will not function the same as they do in Vampire Savior. In addition, damage values are almost completely different. This is not at all arcade perfect!

So, while taking the many gameplay inconsistencies into account, the main use of Vampire Chronicle's training mode is its Record/Playback function. The problem with this though, oddly enough, is the directional inputs do not account for crossing the opponent up, so everything will be coming out backwards. Basically, if you have Lei-Lei throwing Items at you and then cross her up she'll suddenly be doing Gongs. It's a problem, but it is something easily coped with. Vampire Chronicle pretty useless outside of the Record/Playback since its even missing common training mode features like: Roll Direction, Push Block, Throw Escape, Infinite Dark-Force and Input Display.

The good thing about Vampire Chronicle emulates perfectly on nullDC, so for those training on a PC that want a record function it's great; as imperfect as it is. 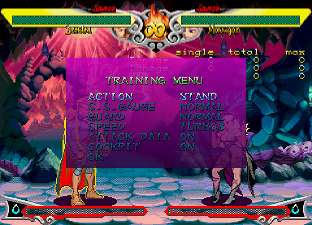 How the Record/Playback function works:

Differences between the Dreamcast and PSP version: 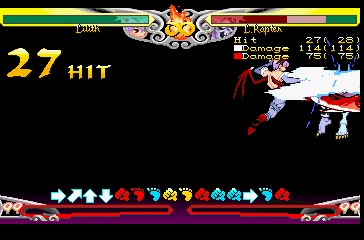 WARNING: This game is not at all arcade perfect and should not be used as a training mode!

A port with a few exclusive features but is overall useless as a training mode.

It has a black background while in training mode, however it makes it incredibly difficult to keep track of spacing between the two characters while moving around. There is a Grid Overlay ("HEX") option, though its usefulness is debatable. "SIGNAL" has three options, the most useful of which is having your character light-up momentarily on block indicating when they have access to Advancing Guard and Guard Cancel.

TRAINING MENU > NORMAL MODE(Press Start, and then Select to access the Training Menu) 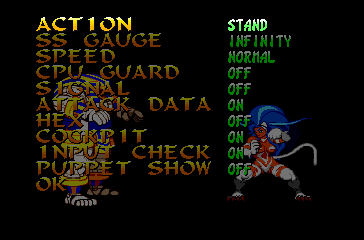 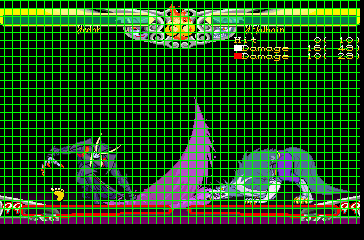 TRAINING MENU > RECORDING MODE
Despite the name, this is not a dummy Record/Playback function. You simply Record yourself beating up the dummy, and then you can Replay it. The dummy cannot be set to human control in this mode. It's a very strange and seemingly useless feature.