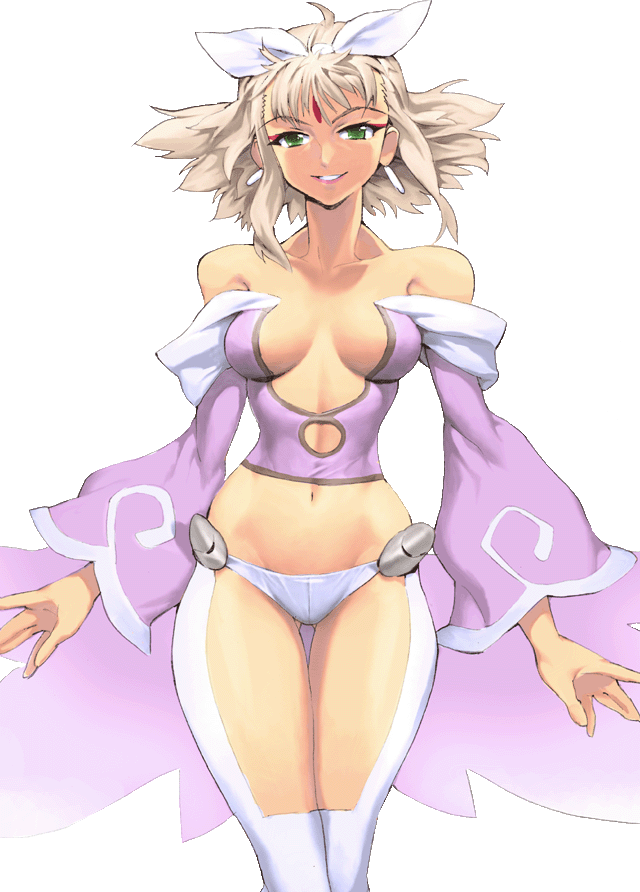 It is possible to play as Hilda in VS mode only, by manipulating some files.

Swap the file names of ヒルダ.player and any other *.player file. Back up the files being swapped. It helps to have some minor familiarity with Hiragana and Katakana in order to know which file you're replacing.

Hilda will then replace that character in the list. She will always have Maya and Kaya (the angel and demon pair) as assists no matter which assist is chosen. Note that Hilda cannot be played in Story Mode in this way; Hilda has no assigned opponents, and you will be dumped back to the green meadow screen before the menu. There are several other minor bugs resulting from this file swap, like being unable to use practice mode.

6C: Holds opponent stunned in the air for a few seconds while charging up. Long after-animation; combos poorly.

5A: Launches three butterflies which turn into daggers and fire diagonally down. Less than 1% damage per dagger, but can be combo'd infinitely with itself in a corner.

5B/j.A/j.B/j.C: Briefly summons a large ball of energy at melee range, as Hilda hops back. One hit for about 8%, launches, usable in air.

5C: A black spear of energy comes out of the ground in front of Hilda. One hit for about 9%, does not knock down.

4A: Hilda creates a large explosion at medium range for about 3% damage. Launches and knocks opponent closer. If opponent is too close, 5A will fire instead. Explosions will continue until the A button is released or the opponent is bounced into melee range. This move easily makes for airjuggle and stun combos.

6A: Fullscreen laser, like Haruka's 41236C, but faster chargeup time. Increased damage and knockdown if the opponent is closer. Does roughly 20% damage at point-blank range and 10% at max range.

6B: A low charging punch for about 10% damage. Won't hit if started at melee range.

22A/2B2B: Hilda teleports into the air, hovers there for a moment, and shoots a volley of energy shots at the opponent. 10 hits, low damage. The 22A version teleports Hilda further away, if the edge of the arena permits, while the 2B2B version teleports to just above melee range.

2626C: Hilda jumps up a short distance and drops a bunch of bombs. 3 hits, moderate damage.

How to Beat: Spam a special, the AI isn't smart.

As A Support Character