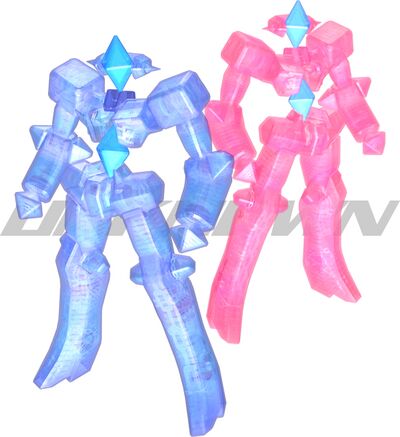 Mysterious battle crystal structure in the shape of a virtuaroid.
It has a certain probability of appearing after repeated time-up victories in ARCADE mode. It has very high offensive and defensive power, and requires a great deal of skill to defeat.

When controller by a player its defense is drastically reduced, making it difficult to master.

Input: Cancel LW into wanted attack.
The attack will come out with no startup. Unlike most similar techniques this is easy to time.

Before using Vertical Turn during a dash or air dash, rotate left/right for a short duration. You can massively alter the direction the corresponding dash direction will face.

Input: During an airdash, Rotate towards a direction and input an attack at the same time.

Ajim will drift heavily towards the rotation direction, basically making a 90 degree movement in the wrong direction while firing (very unique property). Can be used to improve performance of air dash attacks. The direction can be changed by 180 degrees or more depending on how long rotation was held, so it’s possible to use things like AD2:CW while moving forward.

Instant kill technique that can be confirmed from landing a knockdown. Usually a close-range or air knockdown.
Input: Move next to opponent -> LTCW -> backwards quickstep -> LTCW -> RTLW melee.

Opponent will be forced to teleport on wakeup with no kind of hitstun or invincibility and get instant killed by the melee attack connecting as multiple hits. Very difficult to confirm into quickly enough.

A central technique to master for making Ajim work at higher levels of play. There are some decent attacks to cause knockdowns like cLTRW, LW orbs and RTCW.