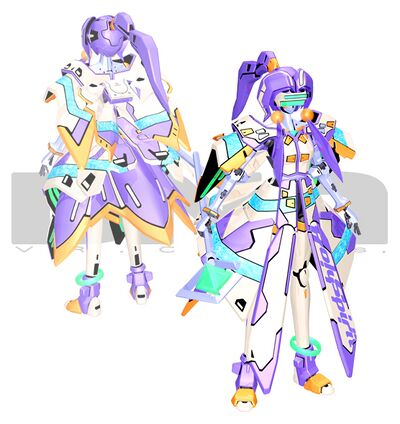 Virtuaroid that fires anomalous attacks such as highly tracking dragons and ice bullets that freeze opponents.
It is characterized by its ability to act continuously with no gaps after a dash attack.
Has high-performance V-Armor which can repel many attacks. However the unit has low durability, so even the slightest mistake can lead to heavy damage. Maintaining an evasive combat style is central.

Landing recovery can be cancelled by firing RW or other projectile. A common technique is to perform this using LTRW laser or LTCW shield.

Universal technique but central to Angelan play.
Input: Perform a horizontal airdash, rotate to the matching side and hold crouch. Keep holding crouch and cancel the dash by pushing a turbo button (hold it to gain additional turbo rotation during fall)

You turn rapidly in midair while staying mobile, and can quickly strafe to a side and prepare an aimed attack. For example a laser.
Central technique for aiming angelans LTRW laser.

Universal technique but central to Angelan play.
Input: While rising in a jump buffer a normal jump attack. Then input a turbo attack before the 'normal' attack begins.
Turbo input will no longer cause an air dash and the turbo attack comes out.

cLW or sliding cLW can be cancelled immediately into a sliding cRW.

See Advanced Techniques / Rowing for more info
Angelan has a unique type of high speed movement that was more common in previous versions of VOOT.
Input: Mash between movement direction 6 and 3 (or 4 and 1) constantly.

You will move much faster on the ground and in the air in a forwards diagonal direction until crouch is released.
Can be performed in various situations: Walking on the ground, starting a crouch attack, starting a jump attack (lasts for duration), falling in the air.

Angelan can combine this with her other rowing type for even more speed or to switch air movement directions. Combining these two rowing types tends to switch the direction further to a horizontal direction.
These rowing types can also be combined with rotation, and stored including rotation using crouch input.

cCW melee can be cancelled into quickstep or dash after the first few icicles are formed, removing the recovery. Very difficult timing. Still a slow attack so not very practical.