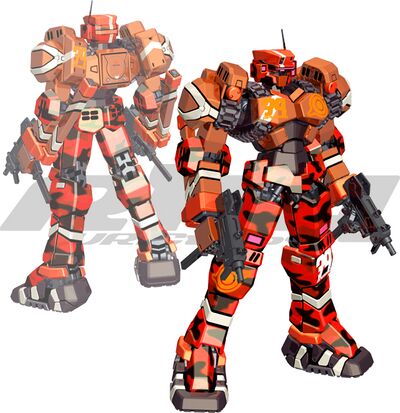 Specialized fighting type virtuaroid equipped with beam tonfas on both arms.
It has high dash performance and a wide range of melee attacks, allowing it to aim for direct attacks using its tonfas. By using your napalm’s blast to disable the opponent’s attack you can approach close distances unscathed.

Input: During standing melee approach (ie. CW melee) input cLW melee and immediately release the crouch input while holding LW.
cLW is not visible and LW melee will come out instead. This gives a way to cancel a standing melee into another standing melee.

LW melee is often ideal for attacking the target and cancelling the approach of CW melee into it is a great way to get into optimal range.

Start walking, then hold the crouch input. You will continue walking with drastically increased speed. Can be combined with walking attacks such as CW and RW by holding crouch after the attack input.

Intermediate level
Interrupt attacks can be used as combo starters. Things like LTRW -> dash melee or LTCW -> dash melee are possible along with more complicated combos.
LTRW is also used for combo extensions at advanced level. This is used for true combos where you alternate melee hits with unblockable interrupts to fill gaps.


The forward dash will have additional momentum and push Battler in the opposite direction. You can use this technique to maintain a favorable stage position while also keeping the opponent in sight.

Input RTCW and quickly release the right trigger. Both RTCW and RTLW will come out.