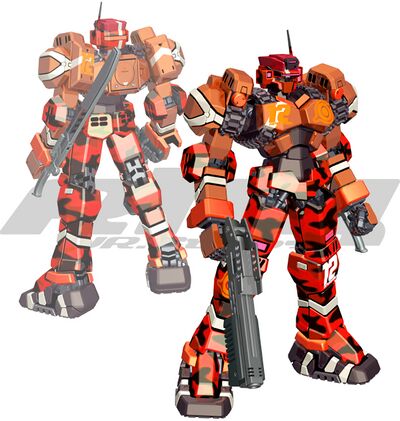 Commander type virtuaroid equipped with a machete and a shotgun. While overall performance is average, the power of the machete is high.
Hold the line using napalm and shotgun, creating opportunities to attack using the machete. You can aim for great damage using melee attacks.

Start walking, then hold the crouch input. You will continue walking with drastically increased speed. Can be combined with walking attacks by inputting crouch right after the attack begins.

Left Weapon can be cancelled quickly into a walk. Some attack cancel routes are also available:

RTRW has a window during the attack to input normal RW. You can use this to reduce recovery time.

Input: stationary cLW or cRW -> walking RW.
Apharmd C will hold up the gun while firing and shots will appear higher than normal, going above medium sized walls.

CW sword wave will come out higher than normal if apharmd C is walking to the left. Can allow firing over some walls.