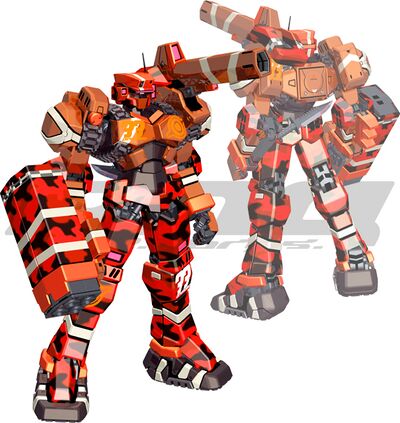 Virtuaroid with high power launchers mounted on the right arm and left shoulder. Mobility and defense are average.
Its tracking and cancellation performance are a bit weak, so it becomes required to use napalm to neutralize your opponent's attacks and get into mid-range firefights. Melee attacks using the knife are also strong.

General
Unique playstyle with focus on fundementals which can be good for learning the game.

Striker has a variety of half cancels with CW, cLTCW, RTCW etc. Mastering these is central.


For CW and dash CW variants the left side is a heavier type missile projectile. This deals high damage but moves more slowly. The right side is the faster, sniper type projectile. When fired without half-cancels they rarely both connect at once, but there is a chance to get a double hit at close range.

One very unique tool to Striker is cLTCW left half-cancel. This deploys small missiles in place that will a few seconds later fire at the opponent. Can be used to control areas and restrict the enemies movement.

Striker has very little recovery on ground dash cancels. You can use it to throw out neutral attacks in rapid succession.

Common technique with Striker. Let ground dash run ~1.5-2 seconds of its duration, then do dash cRW.

The attack will only fire a single shot, making the attack end very quickly and be much safer to throw out. This means heavy use of Vertical Turn until the given time to avoid getting hit during the dash.

Start walking, then hold the crouch input. You will continue walking with drastically increased speed. Can be combined with walking attacks by inputting crouch after the walking attack has begun.

RTRW has a window during the attack to input normal RW. You can use this to reduce recovery time.

RW can be held to get this window immediately. If you input dash on the first possible frame you can dash from holding RW. Jump input can be done at any time.

When behind a wall..
Alternate between firing RTCW [Left half cancel] and cLTLW at a wall. Constantly defend yourself with explosions.