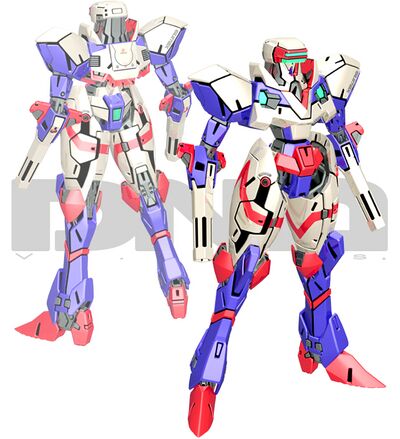 Special virtuaroid that attacks by detaching Bits/Launchers. Overwhelms opponents with highly inductive mines and canceling ring beams. Skill is required to operate this unit due to the complexity of attack methods. If you can place launchers in the blind spot of the opponent you will gain an advantage in battle.

All Center Weapon attacks ‘Deploy’ ERLs to perform an attack. Most normal attacks become unavailable while ERL are deployed.

ERLs start returning to bal after perfoming a CW or running out of ammo. Some attacks can still be performed if they have no ammo or are returning.

Normal CW attacks can be performed when target ERLs are either attached to Bal or stationed on the field with LT inputs.

Special attacks can be performed based on the states of ERLs that are not attached to Bal.

Fires a powerful projectile that is first reflected between ERLs, then aimed at the opponent. Rapid Reflect Laser damage and shot configuration change depending on ERL counts. Jump ERLs act as the final point of reflects and target the enemy. If two beam jump ERL are available there will be two firing points.

Forms two ‘turrets’ that fire a one-step reflect laser at the opponent. These match Left Hand+Left Thigh and Right Hand+Right Thigh. Deals more damage than rapid reflect. A ‘Half’ version can be performed if only one side is available. As a unique trait Bal performs a midair double jump on finishing this attack. You can do air actions from this state like normal. If ERLs are available you can even follow into a jump attack.

Forms a Tetrahedron with walls around the opponent where the four ERLs act as vertexes***. Lasts for a long duration. If done fast enough after knockdown opponent they will be guaranteed walled in. If opponent moves inside they will also be trapped. During the Delta End you can perform any attacks using the ERL, but CW attacks will break it.

*: If 1 ERL was Returning, the vetrex will be displaced at Bal and a Delta End is formed but the visual image is wrong. This allows for a (very dirty) advanced technique at high level.
**: Walls of delta end are not formed. This can be bypassed (see advanced techniques)
***: The ERL remain remain forming walls even while returning.

Usable once per game.

Vacuums and absorbs all enemy projectiles for a few seconds.

This section is kept minimal due to the amount of techniques. Additional details behind further links.

during CW/‘Vulcan Bit’: (Beam) jRTRW Fires a horizontal arc of ring-beams from the Right hand ERL.The Hand ERL can be in any state to perform this, but firing during ‘Vulcan Bit’ is very effective and an infamous technique.

One of the most difficult attacks to dodge in the game. Evasion generally involves doing a jump cancel or airdash cancel to bait the spread to fire in the wrong vertical angle. By using this attack you can force the opponent to make a large evasive movement. Since it’s easy to connect hits with, you can also punish a variety of things.

However it is a jumping turbo attack, if used in neutral is punishable and prevents you from continuing a flow of other attacks. Damage is also fairly low.

when right arm ERL is attached to or near Bal LTRW into immediate [Mine] AD8:RW. Enemy will be hit if close to the ERL. Fast enough to be performed on wakeup.

cLW can be immediately cancelled into walk or dash, but only if the attack was fired with less than 100% Left Weapon gauge. If at 100% gauge, first fire a single standing LW and then walk cancel it into cLW.

Input: Alternate between LW and RW as quickly as possible while avoiding CW input LW and RW can be fired very quickly in succession. If both weapons are set to [Mine] type this allows for the heaviest possible barrage of mines. Tricky input to do perfectly.

cCW cannot be half cancelled normally but a halved version can be done if only one thigh ERL is available or you recall the other ERL after starting cCW (cCW -> cLT LW/RW). The latter is rarely used. Generally you perform some attack chains that lead into half house.

This is useful as you get an attack with roughly the same purpose, only a smaller hitbox and keep the other thigh ERL available for attacks. For example to keep access to cLW which is a central move.

Small mines with high homing properties will appear from Right hand ERL. Right hand ERL ammo will be consumed to 0. The Right hand ERL can be in any state for example performing a CW attack or already out of ammo. These mines did more damage in a previous version but this is still a useful technique.

Trap an opponent inside Delta End while a Hand ERL is in Jump state. When Delta End is dissipating perform Rapid Reflect. The dissipation of the floor of the ‘Pyramid’ causes a heavy landing freeze on the opponent. Against most VR you get a guaranteed hit of Rapid Reflect for heavy damage.