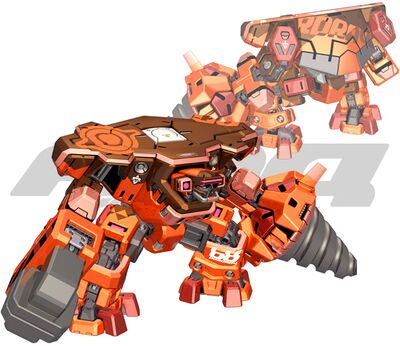 Assault type virtuaroid with high defense and attack power.
His left-arm drill has the ability to penetrate obstacles, allowing attacks even if the opponent is hiding behind an obstacle. The claw on the right arm can be launched to lower the targets mobility.
You can aim for heavy damage by stopping the opponent's movement with a flamethrower or hurricane.

Jump into aerial special attacks (AD8:LW, AD8:CW) controlled with turbo turning.
Hard to evade with either dashes or jumps and has high attack power. Risk comes with long recovery when missing the opponent.

Dordray’s rush attacks can be combined with with turbo rotation to move around the stage and behind walls. You can also pre-aim the rush attack by rotating during your dash.

cRTRW can be canceled part-way through with a ground dash despite being a Right Turbo attack.

cCW can be quickly cancelled into a ground dash while the attack is active.

LW drill attacks target your enemy without requiring lock-on. You can fire the drill inside walls and various parts of terrain for it to eventually home in from strange angles and vary the timing before it moves freely.

See Advanced Techniques / Rowing for more info
High speed movement in a backwards direction.
Input: Move in direction 3, then 2 and immediately hold crouch.
Dordray will move backwards at an abnormally high speed until crouch is released. Same applies for the left side direction 1 and 2.

Move to the border of the stage, perform high speed backwards movement and input CW at the same time. cCW will come out. Input CW again to extend the attack duration. You will slide against the border at high speed while covering a large area with CW stun projectiles.

At the end of aerial special attacks you are in standing state for one frame, before falling starts. Input jump at the correct timing and you can jump in the air.

Input: Walking RW -> stop walking (RW doesn’t come out) -> CW
A single CW ring comes out instantly. All steps have to be done as fast as possible, difficult to execute. Can combo into various things from the stun. In theory can be comboed into itself indefinitely.